Ew, gross! Of all the things to talk about, why do you always pick the most disgusting or most destructive topics, Brenden? 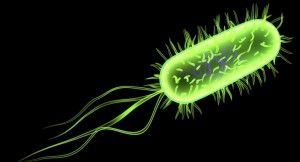 Bacteria are everywhere. Literally everywhere. We’ve even found the little twerps on the outside of the International Space Station somehow. You know, the side exposed to the frigid, unforgiving vacuum of space. When you were a kid, your mom referred to them as germs; actually, she referred to all microbial life as germs, including viruses, which aren’t bacteria at all. So what’s the difference?

Bacteria—Bacterium is the singular, which is rare because you never really deal with a single bacterium—are unicellular, meaning that each one is a single cell, and each one is generally devoted to a single task. A virus, meanwhile, is a microscopic infectious agent that reproduces exclusively within cells.

The common cold, for example, is caused by a virus and infects the cells in your respiratory tract (lungs, throat, sinuses, etc.). It breeds within the cells, makes your body go haywire for a few days until it reaches critical mass, then uses your own body’s defenses as a means to spread to other hosts. All of the coughing and sneezing you do that infects the rest of your family is your body trying to expunge the virus in an attempt to return your body back to a state of normality.

Because the cold is caused by a virus, antibiotics will do nothing to it, as antibiotics are used for killing bacteria. If your doctor gives you antibiotics while you have a cold, this means one of two things. More than likely, you have a secondary infection caused by bacteria that slipped in while you have been sick—Think black ops mercenaries slipping in while the Army Rangers pave the way; or the much less likely option B: Your doctor is an idiot.

Most doctors spend a lot of money to ensure that they’re not idiots, but it never hurts to ask why you’re being given an antibiotic, or any medication, really.

So how about some examples of bacteria? You know how we like to roll in Mad About Science, some lists are about to drop on my head.

You’re probably familiar with one notorious form of bacteria, one that has caused illness and death in a surprising number of people in recent years: E. coli. This is short for Escherichia coli, and every time it starts to surface (usually from undercooked beef), the media has a field day and entire cities begin to succumb to the effects of hypochondria. E. coli is pretty serious business, but did you know that you already have it? And you have a lot of it. We’re talking millions and millions sitting inside of you right this second.

This is totally normal, unless you’re shooting out of both ends like a broken fire hydrant. Most strains of E. coli are completely harmless; it’s when our bodies come in contact with a strain it’s unfamiliar with and unable to control that we start succumbing to illness. When this happens, the bacteria multiply uncontrollably in your gut and throw the entire machine totally out of balance. Believe it or not, your gut plays host to over 40 million bacteria on a daily basis, keeping everything balanced and in check so that your digestive tract works like a German train station.

Another notorious bacteria that devours your sick leave is Salmonella. This is a prominent digestive factor in most birds, especially poultry. Salmonella lives in the gut of poultry and most reptiles and helps them digest their food. When they poop, some living and some dead Salmonella bacteria goes with it. Unfortunately for us, during the butchering process, some of that bacteria ends up on the meat. When the meat isn’t cooked at a high enough temperature to kill all of the bacteria, we eat it and give it a nice little pristine place to grow and reproduce, making us horribly sick for a few days.

The moral of the story here is always make sure your food is cooked. There’s a reason that Chicken Sashimi isn’t on a whole lot of menus.

These bacteria are relatively harmless compared to the next beast on this list. This one gained worldwide notoriety after causing one of the greatest and most fatal pandemics in all of human history. Its scientific name is Yersinia Pestis, but you know it best as the Black Death.

The Black Death happened between 1347 and 1353, and was pretty much the worst time ever. It wiped out at least one-third of the population of Europe, and it wasn’t one of those “pass quietly in your sleep” kind of illnesses, oh no. Bubonic Plague is pretty nightmarish, complete with fever, muscle aches extreme headaches and gangrene. You know, the same thing you get when your blood stops flowing to an extremity.

The most interesting thing about this bacteria is how rapidly it changed entire societies. Something so incredibly small that we can’t even see it managed to heavily alter the course of human history in ways even kings and emperors never could have dreamed of.

Even more interesting, and something most people don’t think about, is that people didn’t even know what caused the Black Death until almost 500 years after it devastated Europe.

Luckily for us, we live in a pretty wonderful time when it comes to medicine. Sanitation is considerably better than it was in the 1300s, and the ability to have a closed indoor plumbing system makes personal hygiene much easier to maintain than it was back then.

If you remember from our fungi article, we’ve even created medicine that kills bacteria from Penicillium spores.

This proves to be a double-edged sword, however. The arms race between man and bacteria will never end, and bacteria will always try to develop ways to exist without being hindered by medicines. We’re seeing this happen now with the abuse of antibiotics and the sudden rapid spread of MRSA (Methicillin-resistant Staphylococcus aureus).

Everyone knows what Staph is, basically miscellaneous infectious bacteria that cause inflammation and blood poisoning if left untreated. MRSA is that, except it’s resistant to our antibiotics because we’ve used them so much.

Just like the velociraptors from “Jurassic Park,” this clever girl learned from her predecessors’ mistakes and is ready to attack you in the bushes or maybe open your doors.

I’m not saying we should stop using antibiotics altogether—I’m not a crazy person. But if you happen to have your antibiotics from a previous infection laying around and want to beat the cold, think twice before popping that pill. You might be inadvertently giving some nasty bacteria a learning opportunity.

Don’t forget to wash your hands!