Let’s hear it for the (winter) birds

Is there any more pleasant sight than flocks of migrating birds taking wing and flying overhead in magnificent V-shaped formations, bound for their wintertime southern climates? Yet, not every species leaves when the weather turns cold in North Idaho and northwestern Montana. Many stick it out, wintering around the lake and mountains, providing an excellent opportunity for an activity that is gaining in popularity: winter birding. 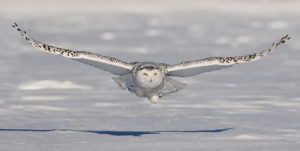 A snowy owl swoops low to the surface of the snow. Photo by Jim Cummings.

According to Brian Baxter, a field ornithologist who instructs tracking and birding classes for the Friends of Scotchman Peaks Wilderness, migratory birds, like people, will stay the winter if they can sustain their food supply and stay safe.

“Winter birding can be both a complex and very rewarding experience,” Baxter said. “Birds are by necessity adaptive, and will change diet, find shelter in or excavate their own tree cavities, cache food, congregate in mini flocks, fluff out feathers to stay warm, move locations, burrow under snow and change daily and evening patterns. When we learn how to detect these behaviors, a whole new birding world unfolds.”

Local birders have established several locations around the region where ample opportunities exist to observe a wide variety of species, from waterfowls to raptors. Prevalent species present in North Idaho and northwest Montana during winter include raptors like rough-legged hawks, northern hawk owls, northern pygmy owls, great horned owls and boreal owls, along with bald eagles and hawks. Waterfowl such as tundra swans, common and Barrow’s goldeneye ducks, common and hooded mergansers and some Canada geese and great blue heron also hang around over winter.

The tap-tap-tap of woodpeckers such as downy and hairy woodpeckers, red-shafted flickers and pileated woodpeckers can be heard across the winter forest; and, finally, songbirds like chickadees, juncos, waxwings and golden crowned kinglets can be observed flitting from branch to branch, filling the muffled outdoors with their songs.

Baxter said because we live on the migration path for many different species, we are occasionally able to view birds in motion, even during the wintertime.

“We do have some species that are in irruptive semi-migration status that may migrate in phases according to weather, food sources, shelter availability and predator pressure levels,” Baxter said.

Other species, such as the boreal owl, are winter residents that generally prefer elevations of 3,700 to 5,300 feet on north and east aspects, making a sighting a rare and beautiful thing to even the most experienced winter birder.

For Sandpoint bird enthusiast Rich Del Carlo, who regularly leads birding outings such as the annual Christmas Bird Count hosted by the Audubon Society, birding is a year-round activity.

“Once you get into birding, it opens up a whole other world to you,” Del Carlo said. “When you’re birding you’re really just present, in the moment with nature, so it’s a very gratifying experience.”

Del Carlo — who loves birds so much he named his tree removal and landscaping business Peregrine Tree & Landscape after the falcon — recommends Sunnyside Road, Denton Slough and the Clark Fork Delta as great locations to observe waterfowl.

“You’ll also see eagles and hawks chasing some of those birds,” he added.

Those interested in participating in an instructor-led birding outing can contact Baxter or Friends of Scotchman Peaks Wilderness to sign up for their numerous winter birding classes held in the region.

For those interested in setting out on their own, Baxter recommends a few vital supplies while foraying out into the winter wilderness to watch birds.

For Del Carlo, birding is the perfect activity for anyone seeking communion with nature — not just because it’s fun, but because it broadens our perspective on the natural world.

“The more awareness people have of the world around them, the more likely there is to respect it and honor it,” Del Carlo said.

• Saturday, Feb. 8; Winter Ecology and the Study of Aerial and Terrestrial Predator/Prey Relationships.

*Most classes end around 3 p.m.