Anyone who has strolled past Charles Mortensen’s bike shop, Syringa Cyclery on Oak Street in Sandpoint, has probably noticed the collection of repurposed scrap metal welded into functional art festively arranged around the building. The pieces — including everything from bike frames welded together to form bike racks, to crushed frames and chairlift seats making benches — draw the eye to an alternate reality. 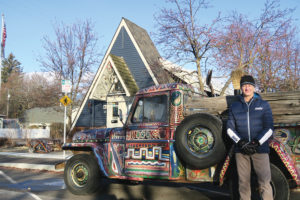 Charles Mortensen stands before his 1961 Willys Jeep truck outside his bike shop Syringa Cyclery in Sandpoint.

Parked outside the shop most days is Mortensen’s 1961 Willys Jeep truck painted a unique hodgepodge of earth tones and shapes, giving the truck a wild look that can only be classified as “North Idaho eccentric.” The repetition and designs almost give the style a Peruvian-meets-Tibetan look. One could almost imagine this truck crawling over a one-lane mountain pass deep in the Aztec country, loaded 20 feet high with harvest bound for the market. Or it would be right at home with Ken Kesey’s Merry Pranksters in the height of their frivolity.

Mortensen, who lives in Sandpoint with his wife Rindy and has two children, Alex, 23, and Isabella, 21, picked up the truck more than 20 years ago when he saw a friend had listed it for sale.

Mortensen said Jablon was selling everything to prepare for a trip around the world and he picked up the truck for “around $1,500.”

“It just looked like a really cool old farm truck,” he said. “I thought, ‘That would make a nice utility truck,’ so I put a little work into it — rebuilt the engine, put in a new radiator. The clutch linkage goes out every two years or so, so I’ve replaced about five of those, but other than that it runs great.”

The truck still has the original flathead six-cylinder engine, which has served this truck well over the years. Before selling it to Mortensen, Jablon successfully trailered horses all the way from Colorado to Sandpoint in the Willys, which he originally bought from a farmer in Nebraska.

“The original color of the truck was red, and it was fading,” Mortensen said. “I said, ‘I might as well paint it.’ I had this idea to hand paint it. My kids were small at the time, so there are handprints and funky stuff they did, but of course they got bored so I took over. Most of it is mine, but the kids did some and my wife Rindy did some and some friends helped here and there.”

The result is one of the most unique vehicles driving around Sandpoint today. In fact, Mortensen said passersby often stop to check out the truck and the paint job.

“People will stop and take pictures of it,” he said. “I get a lot of compliments from people. Lots of people will go out of their way to say, ‘I love this truck, I always wondered who owns it.’”

Syringa Cyclery has become a bit of a museum for the weird art that Mortensen has collected over the years. Since starting the business in 2014 and later buying the building at 518 Oak St., which formerly housed the Arts Alliance, Mortensen randomly adds to the collection.

While he has contributed to many of the pieces, including the chairlift bench atop crushed bike frames, his artist friends often chip in their own pieces. Tom Brunner, a welder artist currently living in Hayden, made a round sculpture that Mortensen is going to turn into a standing plaque for the ¾-inch minus cyclocross bike race he helps organize every year. Brunner was also responsible for welding the bike frames into bike racks out front of the building.

“Tom’s vision with the bike rack out front was, because this building was an old church, the bike rack was like a congregation,” Mortensen said. “The idea is to put an old bike on top of the A-frame in the front, which would be the reverend, and the congregation the rack.”

Another piece of art hanging at the cycle shop was a contribution from the Willys, in fact.

“One year, my son was pulling out of the driveway and parked next to the Willys,” Mortensen. “He caught his bumper on the Willys and ripped it off, so I’ve got the old one hanging from the column outside. I just like the looks of it — I like making art out of old junk.”

When asked if the Willys defines him in any way, he said, “I guess in general, I just like old classic vehicles like that — whether a car or a bike or whatever. In the case of that truck, I’ve had it longer than any other kind of vehicle I’ve ever owned. It’s pretty unique. I don’t know if it defines me or I define it, but we’ve kind of sort of grown together.”

Mortensen said he has no plans to get rid of the truck, even though Jablon asked to buy it back from him shortly after selling it — paint job and all.

“I’ll never sell it. I’ll keep driving it until it dies,” he said. “I’ve thought about touching up the paint job, but it’s still hanging on there pretty well. It’s developed a sort of patina. … People have asked to buy it, but if it doesn’t go anymore, it’ll become some sort of lawn art. Maybe I’ll put some dirt in the bed and plant a tree.”

Check out Mortensen’s truck for yourself at his bike shop Syringa Cyclery, 518 Oak St. in Sandpoint.

Got a cool ride you’d like us to write about? Send in a picture of your ride and a little info about what makes it special to [email protected]