From breakwater to 4×4 barriers:

The repurposing of a thousand tires into a off-road paradise

When the big windstorm hit last year, all hell broke loose in North Idaho. Trees came down all over the county, houses were damaged, boats sank and were destroyed.

At Garfield Shores Resort and Marina Club, the breakwater made of over a thousand tires that had protected boats for over three decades came apart and had to be salvaged and removed. 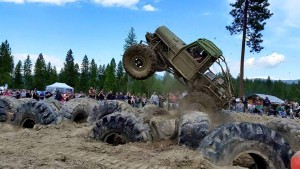 Apex Construction won the bid to remove the breakwater. After gathering over 1,000 tires, Apex was able to find a new home for them; instead of the landfill or a salvage yard, the tires would find a new home at a brand new outdoor entertainment venue called the Purcell Trench Ranch near Bonners Ferry.

“He came to us and said it would be cheaper for him to give us the tires than to pay a company to get rid of them,” said Mac Miltz, co-owner of Mountain Mafia Entertainment and the venue which opened last year.

The tires, which range in size from semi trailer to huge equipment tires, were delivered on site to the ranch 11 miles north of Bonners Ferry, and Miltz and his partners have been busy finding uses for them.

“So far we haven’t even scratched the surface,” he said.

The off-road motorsport venue is a new venture by Miltz and partners Ben Spinney and Grey Whittier aimed at providing a world-class meeting place for off road enthusiasts. Featuring roughly 90 acres of terrain that varies from Hill ‘n Hole courses to side by side straight tracks, the Purcell Trench Ranch is billed as a “mototrack for trucks.”

The tires are primarily used as barriers and obstacles, defining the courses.

“We try to reuse all kind of stuff,” said Miltz. “When they replaced the lanes at the border crossing recently, we got these big 12 foot slabs of concrete and created a slick wall. Some of the tires also came with these huge inflatable buoys inside of them. They’re bright orange, so we used them as gates and boundary markers.”

The course is fully irrigated, with over 3,000 feet of pipe and also features a deck ship water cannon that shoots water over 150 feet. While the water cannon helps to slick down the mud holes on the track, it also helps entertain the crowds.

“You can point it straight up and it comes down like mist, cooling people off on a hot day,” said Miltz. “Kids love it.”

Also featured at the track are stadium lights, one of the largest playpit in north America (it’s 3 acres!), a Hill ‘n Hole course, a forty-foot tabletop, and side by side straight tracks.

“There are lots of obstacles,” said Miltz. “It’s kind of a terrain park feel. We came at this from snow background, so a lot of the features and hits have that snowboarding feel. It’s pretty unique.”

Open from Spring to Fall, the track is designed for 4×4 trucks and side-by-side UTVs.  No 4-wheelers or dirt bikes allowed at this time. 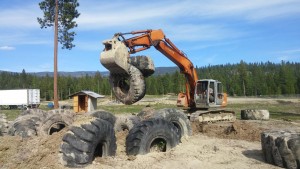 A dozer positions some of the repurposed tires. Photo courtesy Mountain Mafia Entertainment.

“Safety is a big thing for us,” said MIltz. “The trucks are all required to have seat belts and roll bars. If you flip or flop, we try to keep it as safe as possible.”

The Purcell Trench Ranch is event-based, with the Hill n’ Hole and the side by side events are held under the supervision of the Northwest Mud Racing Association.

“We have three or four open wheeling events a year where you bring your own trucks,” said Miltz, who also said there are a couple of off road competitions also offered with more professional drivers featured.

“One of our events called Mountain Havoc is for all different styles of trucks,” said Miltz. “Participants have to be voted in. Last time we had 20 trucks compete from six different states and three provinces of Canada. These are truly some of the best off road truck drivers in America.”

The next open wheeling event called “Battle for Havoc” will take place October 2-4, 2015 and will feature mild to wild hills, trails, slick walls, NMRA racing, mud and pit bogs and much more. This event also features a Havoc qualifier. Pro trucks and drivers will be onsite to battle it out for one spot in the 2016 Mountain Havoc Competition.

While the track is designed for use by off-road truck drivers, it doubles as a spectator venue, with places to camp everywhere.

“A lot of people come just to spectate,” said Miltz.  “The four-wheel driving community is really amazing. A lot of these guys will give you the shirt off their backs. They love giving spectators rides.”

“It goes without saying that all federal, state and local laws apply,” said Miltz. “We don’t allow drinking and driving, and our pro security staff is mainly there for information and to talk to the people, to explain all the rules.”

While there are other off road parks in the area, Miltz says the Purcell Trench Ranch defines itself as unique because of the dedication to safety, fun and the sheer size of the venue.

“We’re a lot different than, say the Mud Bogs,” said Miltz. “We’re family-oriented and we’ve had a really great response from Bonners and the surrounding areas.”

The future for Mountain Mafia Entertainment and the Ranch is a bright one. Off-road motorsport is only the beginning. The venue is ultimately designed to host people that come together with like-minded interests. Miltz foresees all different types of events in the future, including UTV specific competitions, snowmobiling, concerts, mud endurance runs, retreats and other outdoor activities.

To learn more about the Purcell Trench Ranch, visit them on Facebook (type in Mountain Mafia Entertainment).