Jojo Rabbit, comedy and the Holocaust

How do you make fun of one of the darkest chapters in world history?

It’s a question comedy filmmakers have grappled with for decades. World War II, the Third Reich and the Holocaust still cast a long shadow 80 years later. And with homegrown fascist and nationalist movements more visible than ever — the 2017 Unite the Right rally in Charlottesville, Va., being the starkest recent example — many say the subject is no laughing matter. 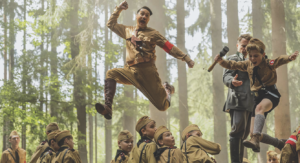 Taika Waititi disagrees. The acclaimed director is famous for his irreverent and daring style in films like What We Do in the Shadows, The Hunt For the Wilderpeople and Thor: Ragnarok. His most recent film, Jojo Rabbit turns that style to the themes of Nazism, political indoctrination and the Holocaust.

The film follows Johannes “Jojo” Betzler, a young boy immersed in Nazi Germany’s Hitler Youth program. His belief in the Nazi cause is absolute — so much so that his fanaticism manifests as a buffoonish imaginary friend in the form of Adolf Hitler.

Waititi himself plays the absurdist interpretation of the dictator, more out of necessity than anything else. While seeking backing for the project, he soon realized that if he wanted a cartoonish, idiotic Hitler in his movie, he would have to play the role himself.

“[The producers] made a great point, which is that the way that character was written, I think in the hands of someone who’s overthinking it, it might actually get twisted into, I guess, more of an authentic portrayal of Hitler,” Waititi told NPR. “That was never the intention. The only way that character works is if you play it for exactly what it is, which is a 10-year-old’s idea of an imaginary friend.”

In the film, Jojo’s fanaticism is shaken when he learns that his mother is sheltering a Jewish girl. The discovery challenges his preconceived notions of racial superiority, ideological purity and unflagging loyalty to the state.

The result, according to critics, is a satire both sharp and sentimental in tone — and worthy of acclaim. Jojo Rabbit is nominated for six Oscars, including Best Picture, Best Adapted Screenplay and a Best Supporting Actress nod for Scarlett Johnsson in the role of Jojo’s mother, Rosie.

But not everyone is a fan. A vocal minority of critics view Jojo Rabbit as a tonal misfire and a toothless satire.

“With no bedrock of horror, and no comic insight into it, Jojo Rabbit is a satire without purpose,” wrote Jake Cole for the website Little White Lies.

Disagreement over how best to satirize the Third Reich has a long tradition — undercutting Nazism and Hitler through comedy predates the destruction of the Reich itself. Charlie Chaplin famously skewered Hitler in his 1940 comedy The Great Dictator. But while that film uses obvious fictional analogues for Hitler and his minions, Mel Brooks went a step further by sending up the Nazis themselves in his classic 1967 comedy The Producers.

That movie centers on the fictional Broadway play Springtime For Hitler, which is intended by its producers to be an offensive, deliberate flop. By invoking Nazi iconography for comedic value, Brooks laid several ground rules: know what imagery is too raw for humor; avoid trivializing real, historic suffering; and always direct jokes at the villians — never the victims.

In her video essay “Mel Brooks, The Producers and the Ethics of Satire about Nazis,” cultural critic Lindsay Ellis argued that Brooks’ comedic philosophy is essential. Because totalitarianism is dependent upon an illusion of strength and superiority, an effective satire is equally dependent on dispelling that illusion through ridicule.

“This isn’t just Hitler for Hitler’s sake,” Ellis stated in the video. “This is heightened theatricality that unmistakably showcases the absurdity of ethno-nationalism.”

So does Jojo Rabbit deserve its critical praise and award nominations? Or does it fail in its aim to skewer its Nazi targets? Decide for yourself when the movie hits the Panida Theater this week.