An interview with: Iration

Describing a band’s sound can be as easy as naming a genre. As someone who is constantly referring her friends to new music, I take pride in being able to describe a certain artist’s music in just a few words.

One band I love that I’ve never been able to pin down, however, is reggae-rock-dub-indie outfit Iration. If I tell someone they’d like Iration, and they ask me to describe the band’s sound, I say simply, “listen to them.”

I caught up with lead singer and guitarist Micah Pueschel over the phone while the band was getting ready to play a show in Boise earlier this month to talk about the band’s genre hopping, their love of live performance and how North Idaho is so much better than Boise. 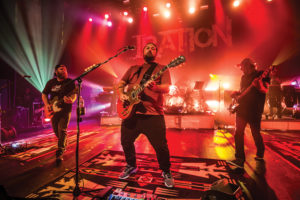 Iration playing at the Ventura Theater in Ventura, Calif. earlier this year. Photo by Ryan Hadji.

SR: I was going to ask you guys if you’ve ever been to Idaho, and then I saw on Twitter you were in Boise today, so that’s cool.

MP: Yeah, we’ve been to Idaho many times. We’ve been through North Idaho once, but never played there, or stayed there. So this will be the first time.

SR: Well, we have the lake, so we are way better than southern Idaho. I’m sure you’ll enjoy it, being from Hawaii, and then California.

MP: Yeah, we like the water and we like to golf, and you guys have golf and water — two things that we love.

SR: Alright, awesome. So, I think because you guys are opening for the Wailers there will be people unfamiliar with you who assume you’re straight-up reggae. What would you say to people who don’t know what to expect from Iration?

MP: I would almost just say nothing. I would just say, “Keep an open mind. Show up, and come see us. Formulate your opinion, post-show.” We’ve opened for a number of different acts whether that be reggae, country, rock, pop, hip-hop, and we take pride in putting on a good show and a show that, no matter what genre you listen to or you’re into, you’ll enjoy. I think that that’s the beauty of live music — the people on stage are doing it, enjoying it, and you know, putting on a real live show with real instruments and everything, and I think that speaks louder than genres or classifications. So show up, enjoy it, and if you like the Wailers you’ll like what we’re doing, too.

SR: Yeah for sure, and I only ask because trying to describe your sound is really interesting because we’re talking rock, we’re talking reggae, we’re talking alternative, and a little dub. I’ve been listening to “Fly With Me” lately and you see the development from a song like, say, “Falling.” I don’t want to do the whole putting-your-genre-in-a-box-thing but what can be expected next from you guys?

MP: What we pride ourselves on is being unpredictable, doing what is not expected and doing things that are outside of the box. Maybe it confuses our fans sometimes, but I think as they listen and give it a chance, I think it comes into focus. We’re a band that’s all about the song. We focus on writing songs, and we try to treat each song as an individual entity and give it what it needs and nourish them separately from each other. I think that leads us to having songs that sound ethereal, a little bit dubby-reggae. And we have a new single coming out called “Borderlines” that is a little more indie rock. There’s a lot of variation.

SR: That makes sense. You talked a little bit about performing live. What do you hope people take away from your live performances?

MP: I hope people take away that it was enjoyable. Sometimes people come away from a live show and either it didn’t sound right, or the band didn’t seem like they were into it. We just really want them to come away feeling good, have a smile on their face, thinking, “That was awesome.” We enjoy playing, we enjoy being up there, and we try to give every show — no matter where we are — the same amount of energy, intensity and thought. Whether it’s Sandpoint, Idaho, or Los Angeles, New York or Chicago.

SR: I love hearing that, because I’m really excited to see you guys play, and Sandpoint might be pretty small-time, but it’s a lot of fun.

MP: We like playing new places we’ve never been before, so we’re really looking forward to it.

Catch the double-headliner show with Iration and The Wailers at the Festival at Sandpoint on Friday, Aug. 11 at Memorial Field. Call 265-4554 for tickets.