The world’s a stage

Looking back on the highlights of my childhood, I’d definitely have to list the time that I ruled a kingdom. There was also the time I lived in the woods with a handful of fellow magical dwarves, and the time I joined a pack of wolves. Honestly, my best childhood memory would have to be my stint as a singing mermaid — er, singing merboy, technically. 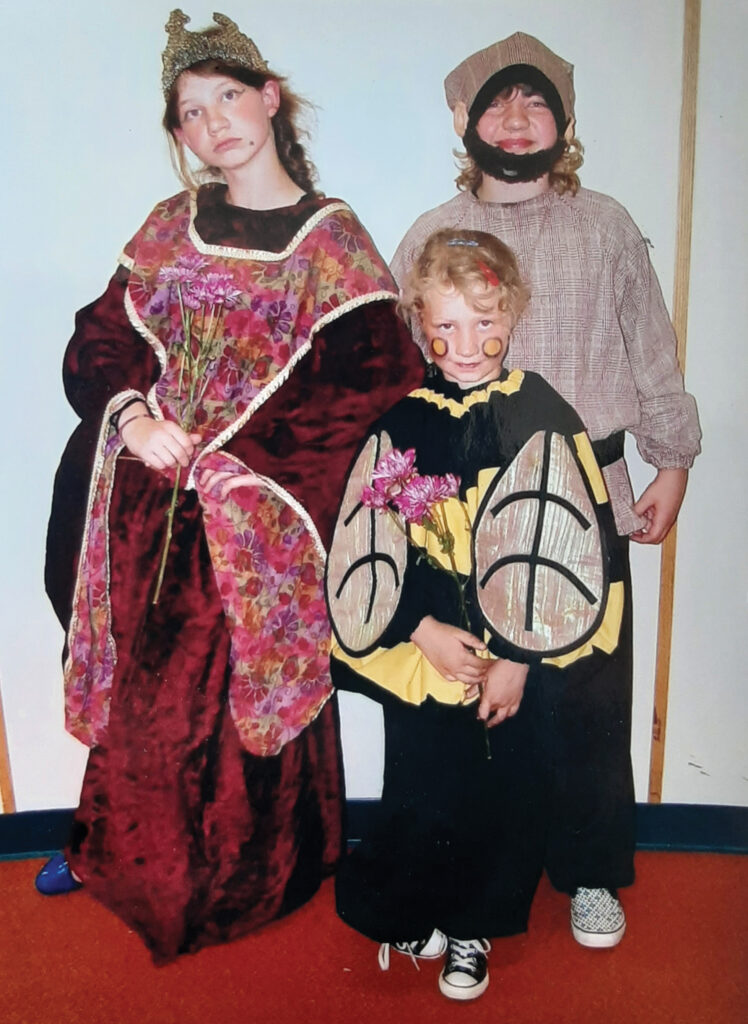 The author, left, poses with her sisters and fellow thespians after a performance of Rumpelstiltskin at Hope Elementary School sometime in the aughts. Courtesy photo.

None of these things happened in reality, of course, but on stage. I was fortunate to participate in several theater productions during my elementary years, most of which were brought to North Idaho by Missoula Children’s Theatre, a Montana-based program that brings opportunities in the performing arts to communities far and wide.

These productions pop up locally several times a year, including an upcoming performance of Rumpelstiltskin brought to Sandpoint by the Pend Oreille Arts Council. Auditions for 50-60 roles will take place at Forrest Bird Charter School on Monday, April 18, and all local students in grades K-12 are encouraged to try out.

What MCT did for Hope Elementary in my childhood seemed nothing short of magic. MCT personnel (usually two people) would arrive on Monday and facilitate auditions after school. The memories are fuzzy, but I believe every student was asked to perform a series of small tasks meant to determine their ability to memorize lines, sing along and be generally expressive. By the end of the evening, each student would have a part in the upcoming play. By Saturday, after a week of after-school rehearsals, we would be performing it — twice — for our families.

How we made it from clueless kids on Monday to costumed thespians putting on an entire production on Saturday remains a testament to the hard work and dedication of MCT’s touring staff. Those adults were some of my favorite people during my formative years. With their help, I became an obnoxious queen, a magical and nerdy dwarf, a sly wolf, a shy merboy with a singing solo and so much more.

Those of us who grow up in small communities are not always given the opportunity to be full-blown theater kids in the widely understood sense. Had I grown up somewhere else, I have no doubt I would have been a Wicked-loving, lead-part-covetting youth performer. As life would have it, my chance to be that person only came once a year, and I lived for it.

Through MCT, my explosive enthusiasm (often deemed to be “too much” for everyday life) was given a literal spotlight. I wasn’t too loud — I was an example for the other kids of how to project your voice to the audience. I wasn’t too dramatic — I was owning my role and trying my best. My appetite for the perfect combination of hard work and silliness was fulfilled on Saturday night as the lights went down and the applause commenced.

As kids, we are constantly pretending. It starts as imaginative play, but evolves into a broader sense of pretend. We pretend that we know what we’re doing, who our friends are, who we are. The uncertainty of growing up lends itself perfectly to acting — acting like it isn’t hard and awkward and scary, when it most certainly is.

I will forever be thankful for those weeks of fun, learning and emotional solace with Missoula Children’s Theatre, and I’m glad to know that other Bonner County kids are still able to access that joy.

Auditions for Rumpelstiltskin, an MCT production brought to Sandpoint by the Pend Oreille Arts Council, will take place on Monday, April 18 at Forrest Bird Charter School from 3:30-5:30 p.m. Those auditioning should arrive by 3:15 p.m. and stay for the full two hours. Some cast members may be asked to stay for a rehearsal immediately following the audition.

Performances of Rumpelstiltskin will happen Saturday, April 23 at 1 p.m. and 4 p.m. at the Panida Theater, 300 N. First Ave. Tickets are $5 for youth and $15 for adults. Buy tickets at the door or online at panida.org. For more information, email [email protected]