It was standing room only at the Sandpoint library meeting room when more than 100 people showed up to see Democratic gubernatorial candidate Paulette Jordan speak. 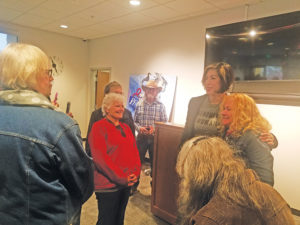 Jordan, who would be Idaho’s first female governor and the nation’s first Native American governor if elected, told attendees that a vote for her meant a vote against cronyism and good-old-boy politics.

Medicaid expansion, on the ballot this year for voter approval as Proposition 2, was a major topic at the rally. Jordan believes that expanding Medicaid is both the morally and financially correct direction for Idaho. She said that if voters both approve Prop 2 and elect her as governor, she will ensure that the will of the people is enacted by the executive branch.

“By not expanding Medicaid, we have already lost hundreds of millions of dollars that could have benefited the state,” she said.

She wasn’t so supportive of Proposition 1, which would allow horse-racing venues to install historic horse racing terminals to boost revenue. The terminals allow bettors to gamble on horse races that have already taken place, but Jordan views the proposal as a veiled attempt to expand gambling.

Jordan pushed back against criticisms of her association with the super PAC Strength and Progress, created “to accept donations from the Coeur d’Alene Tribe … for spending on Federal First Nations’ issues,” according to the Idaho Statesman. The Statesman linked Jordan’s association with the PAC to high-level staffer resignations within the campaign. At the rally, Jordan criticized the media for “seeking to divide us” and said that supporters of her opponent, Brad Little, were spending millions in PAC money to attack her. She emphasized that her campaign was not accepting corporate donations and would not be vulnerable to corporate influence.

“We’re challenging people to think about what’s going on with the corruption (in our government,)” she said.