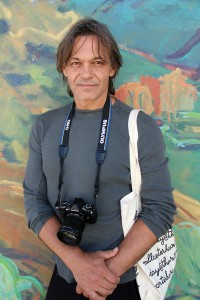 Russian born Antonov is one of many special guests at this week’s international theatre project “Emerge: Unveiling the Truth Within Us” held by American Laboratory Theatre (ALT).

“This project is a huge stepping stone in our vision to make Sandpoint a performing arts hub in the west,” said Jule Berreth, Directing Producer for ALT.

Berreth and ALT Artistic Director Jesús Quintero have invested a lot of passion and energy into the idea that Sandpoint can be more than just a small town in the mountains, but a theatrical epicenter of the west, increasing the cultural output of the town, as well as the economic impact.

“I’ve seen it in SoHo, in Brooklyn,” said Antonov. “These industrial areas where artists moved in, then businesses move in and it’s thriving.”

Antonov is just one of many international guest lecturers who have taken part in ALT’s project, which takes place from July 29–August 4 at the Eureka Center in Sagle.

Born in Russia on the Volga River, Antonov’s parents moved to Kazakhstan because “it was easier to find food there,” he said.

Antonov began his odyssey as a photographer indirectly through the heavy metal band Black Sabbath.

“We were not able to see the images of the bands we were listening to,” he said. “The government tried to track where you got them, how you paid for them.”

Undaunted, Antonov picked up a camera and began photographing photographs of popular bands like the Beatles and Black Sabbath, just to be able to look at his favorite performers.

It wasn’t long before Antonov turned his camera to people. After moving to Moscow, he attended a theatrical performance that changed his life. He was so moved by the production, he began his long career as a theatrical photographer.

“I’m into art that creates,” he said. “I don’t need to see on stage what I see in real life. I need it to touch my soul. Theater wakes me up spiritually.”

Over the years, Antonov’s humble beginnings ended up with some big assignments, such as shooting for Vanity Fair, Vogue, GQ and Condé Nast. Some big names have appeared before his camera, such as Brad Pitt, Johnny Depp, Winona Ryder and Kate Winslet.

“Kate Winslet was an interesting one,” said Antonov. “After ‘Titanic,’ she hated photographers deeply. When I met up with her, she said ‘You have three clicks for my photo,’ and I could read in her eyes that she hated my profession.

“It’s all about demasking the people to photograph them,” continued Antonov. “You need to provoke people to get a real reaction.”

In regards to the five-day retreat, Berreth couldn’t have said it better herself.

“We want to strip away the mask,” she said. “To unveil the truth in everyone. There is a term called taksu, which means to transcend oneself. To strip away all the masks and find the core of you.”

Each of the participants will bring their own materials to the retreat, where Jesús and other instructors will guide their output into an emotional performance not only for the performer, but for the audience, too.

“When you are teaching others, you are actually teaching yourself more,” said Antonov. “The more you give, the more you receive. I’m thankful to those people who taught me. I owe them. I can’t share it with them, but I can share it with others.”

After five days of preparation, the attendees of the retreat will emerge into Sandpoint on Monday, Aug. 3 and hold “pop-up” performances around town starting at 3:30 p.m., at retirement homes, Jeff Jones Town Square, the City Beach, and culminating at the Little Panida Theater for a free show at 6:30 p.m.