As the Dish at Dover Bay restaurant enters its 10th year in business, owner Gary Peitz and executive chef Eddie Sneva have plenty to celebrate. 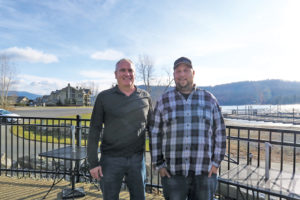 For one thing, rarely in the restaurant business do you see the head of management and executive chef stick together for an entire decade. Second, that consistency has led them to be able to remain open through the winter for the first time ever, with the summertime hotspot set to be open 4-9 p.m., Thursday-Sunday, even through the coldest of seasons.

“We’ve always had requests to stay open [in the winter],” Peitz said, “but we wanted to get to a point where we thought we’d be successful, and Dish is probably more popular than it’s ever been.”

Though most would likely think of tacos and avocado fries on the sunny, waterfront deck when they think of Dish, the changing seasons means a change in offerings. On the winter menu, Sneva highlighted the kale and squash salad, shrimp and polenta, Columbia River steelhead, pan-seared duck breast and stuffed acorn squash chicken pot pie as some signature Dish meals going into the colder months — “fun, good, hearty, comfort winter food,” as Sneva summed it up.

“To his credit, [Sneva] has basically 100 percent creativity with the menu and has kept it vibrant and fresh for 10 years, where a lot of our competition … run the same menu year after year after year,” Peitz said.

The Dish team also takes pride in providing gluten-free and vegetarian options, all made with quality ingredients.

“We could go with a lot cheaper ingredients and charge the same amount, and we don’t do that,” Peitz said. “From the quality of the food to the quality of the drinks and the wine — the price point is right, especially for being on the water.”

The Dish cocktail menu has also been updated for winter, featuring a snickerdoodle martini and hot buttered rum — but the ever-popular blood orange martini remains on the menu, as well. Peitz said rarely a night goes by that he doesn’t receive a compliment about the work of longtime Dish bartender Val Guglielmetti. 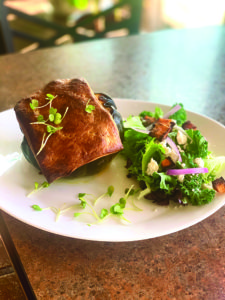 Though Peitz originally imagined Dish would be home to a bar scene known for its happy hours, the restaurant has grown into something more refined in the decade since it opened.

“We have become a true dinner house,” Peitz said. “We are a destination dinner house, and in the deep summer, that — in combination with being in a marina — is what fuels this place.”

But with the water too low to sustain that marina scene over the fall and winter months, Peitz said he’s relying more than ever on locals to fill the tables at Dish. Thankfully, that’s something they’ve been doing a lot of lately.

“We’ve got to give a shout out to the Dover Bay residents,” he said, “because really, without them, we wouldn’t be sitting here.”

Dish is located at 651 Lakeshore Ave. in Dover. View the full Dish winter menu at dishatdoverbay.com.