An interview with: George Thorogood & the Destroyers

When the opening guitar riff rings out for “Bad to the Bone,” followed by a strong kickdrum snap at the Festival at Sandpoint on Saturday night, expect the crowd to lose it. Big time. 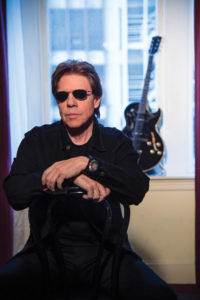 After 16 studio albums — six of which went gold and two platinum — George Thorogood and the Destroyers have still got it. Over the course of 40 years, the boogie blues band hailed “The World’s Greatest Bar Band,” has amassed an unheard of amount of hits, including “Who Do You Love,” “I Drink Alone,” One Bourbon, One Scotch, One Beer,” “Move It On Over,” “Get a Haircut,” and, of course, the ultimate badass anthem, “Bad To The Bone.”

With his longtime band The Destroyers, consisting of Jeff Simon, Bill Blough, Jim Suhler and Buddy Leach, George Thorogood remains one of the most influential performers in classic rock and blues today.

We were fortunate enough to spend a few minutes on the phone with George, who, in his gruff and humorous way, talked about everything from Idaho potatoes to the greats that influenced his past. Read on, me hearties:

Ben Olson: Hey George, how are you, sir?

BO: I bet you are. Thanks so much for taking the time to talk with us.

GT: So what’s your moniker over there in Idaho? What do you put on the license plate?

BO: You know, it’s embarrassing. There are two Idahos, really. There’s a southern part, and there’s the north. We’re in the north, which is really more like Canada. The south part, they grow lots of potatoes down there, so, naturally, they put “Famous potatoes” on our license plates.

GT: Hey, I got it right. That’s your slogan? Famous potatoes.

GT: Oh man, we gotta work on that.

BO: You’re from Delaware right. What’s your motto over there?

BO: I’d take that over the potatoes.

BO: Yeah. You know, if you ever eat McDonald’s French fries, they probably come from Idaho. That’s probably where the whole famous thing comes in.

GT: Oh man. I never heard of anything like that. So you’re the potato state.

BO: Well, not really. The north is all about lakes and rivers and mountains. Really more like western Montana – lots of wildlife, that kind of thing.

GT: I’ll work on that for you.

BO: Please do! If you can come up with a better slogan, we would all love that here in North Idaho. So have you ever played a show our way before?

GT: Yeah, we did a double header in Baltimore, then Washington, D.C.

BO: Are you still a road dog in many ways? Do you enjoy the tour life still?

GT: That depends on where I’m going. If I’m going to Idaho, I’ll get myself some potatoes. I’m not much of a potato eater. Lotta starch in those potatoes, you know.

BO: I hear you. So you have a new album coming out, “Party of One.”

BO: I just listened to it and really loved it. It was a stripped-down sound I haven’t heard of yours yet. How did this all come about?

GT: Well, it was long overdue. You know, I started playing acoustic guitar before I put this band together and never got around to doing it. I’d been talking about it for years, and I didn’t think it was ever going to happen until I came into contact with Rounder Records. A few years ago they put out some reissues, and we discussed this particular project and they were still interested in it. So we went for it, but it took a couple years for us to put it together. It wasn’t really a slam dunk slap like people might think.

BO: When you’ve got that spare kind of sound, you’ve gotta do it just right. I think you nailed it, you’ve got some great songs on there – everybody from Robert Johnson to Hank Williams to Dylan. Is this kind of like a tribute album of yours?

GT: In a way. I think it’s more of an album of influences more than a tribute. The tribute album we did was “2120 South Michigan Ave.” which was a tribute to Chess Records. This one is more like “George Thorogood’s influences from when he first decided to become a musician.” These are the strongest people – Dylan, The Rolling Stones, John Lee Hooker, who I was really close to, Hank Williams. You know, all the big boys. I’m not unique in this way – other people have influenced me over the time. I was just trying to find a song by each one of them. It all kind of fell into place after awhile.

BO: So The Destroyers have been playing with you a long time. Was this new album a different experience doing it on your own.

GT: Yeah. Frightening (laughs). I got about halfway through the record and realized why I stopped playing acoustic and got a bass player and drummer.

BO: When did you get your start? Did you have another plan in the beginning?

GT: Not really. My plan was the same as everybody else’s. When we saw The Rolling Stones on shindig, that was it. Not unlike a lot of my contemporaries like Tom Petty and the Pretenders, and people like that. We were all hooked with the bug back in the ‘60s. We all wanted to do it. We all wanted our hair to look like Keith Richards’ (laughs).

BO: You actually played with the Stones for a while, right?

GT: We did some shows with them, yeah.

BO: How was that experience? Or do you remember it all?

GT: Well, what do you think? Of course I remember it.

BO: You have any stories from the road you want to share?

GT: Every day that we played, at least one member of The Rolling Stones would come out to see us play and shake our hands and tell us how much they enjoyed what we do and that they were big fans of ours and they thought we were really great. How’s that for a story?

BO: That’s really incredible. You left this great mark on music. Does it ever get old when people tell you how much your music has meant to them?

BO: Well, I’ve never achieved that level with any of my music. I’m usually always ready to duck if someone throws something at us.

GT: You never get tired of someone complimenting you on your work.

BO: Have you seen rock and roll change in the years since you started playing?

GT: Who hasn’t? Rock and roll hasn’t changed, it stopped. It stopped years ago. It’s just still alive in name only. It’s like country music. That’s not country. It’s pop music with a cowboy hat. So, rock and roll as we knew it kind of faded out by 1970, ‘71, ‘72. Led Zeppelin, to me, and Jimi Hendrix, were the last word in rock and roll. The bulk of what you play on classic rock radio comes from about 1955 to 1985, doesn’t it? That’s 90 percent of the statement of rock music, so when you say what’s the state of it, I say, ‘There is none, it’s all classic rock now.’ Nothing new has emerged that has stirred the world the way “Stairway to Heaven” has or “Jumpin’ Jack Flash,” or “Rock Me Baby.” Those are the big ones.  Those are the ones you circle your format around, don’t you?

BO: Do you see another genre emerging that has the staying power of rock and roll?

GT: No, I don’t think another Jimi Hendrix is going to come along, do you?

BO: I hope so, personally. I think we need it.

BO: Sure, but I hope we have some more people emerge that have the same influence like a Jimi Hendrix had on music, you know?

GT: It’s a tough act to follow. There’s only one Marlon Brando, right?

BO: So, what would you like to share with your fans in anticipation of the upcoming Festival at Sandpoint show?

GT: Expect to see probably the greatest rock and roll experience in existence. Isn’t that what they come for? That’s the idea, isn’t it? I don’t think people buy tickets and say, ‘Hey, I really hope to see a crummy show.’

BO: Well, we’re looking forward to seeing you, George. Thanks so much for talking with us.

GT: No problem. Remember, rock and roll never sleeps – it just passes out.

George Thorogood and the Destroyers play the Festival at Sandpoint at Memorial Field on Saturday, Aug. 12. For ticket information, call (208) 265-4554. To listen to Thorogood’s new solo album, “Party Of One,” check out his fan site at www.georgethorogood.com.