Please ignore the funding behind the curtain

“It is the responsibility of intellectuals,” Noam Chomsky wrote in a 1967 essay, “to speak the truth and expose the lies.” Regrettably, for some intellectuals, such a function — a duty to be honest — would be more of a bug than a feature. Indeed, like all shills, the intellect/shill has his corporate masters, and to please these masters he is required to do the opposite of what Chomsky asserts: He has a responsibility to suppress the truth and regurgitate the lies. 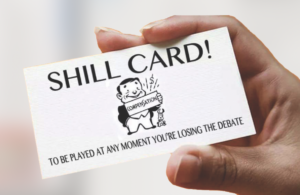 Though he may speak with conviction, the corporate and/or political shill is a man (or woman) utterly devoid of honesty and integrity — that is to say, he has no conviction that cannot be amended with a carrot and a stick. Where the needle on his moral compass points depends on the source of his remuneration.

The shill in Congress is easy to unmask. His modus operandi is all too familiar: he receives money from, say, Big Oil or Big Pharma and subsequently introduces legislation which benefits the executives of those industries. Of course, he does all of this under the guise of wanting to help “create jobs” and “grow the economy.” His motives, if you’re so inclined to believe him, are never selfish.

For his ability to play his role so convincingly — with such good stage, screen, and vocal presence — and for his willingness to recite the script written for him by Think Tanks, corporations and political parties, this year’s Academy Award for best actor goes to him.

Cue the scene where he declares: “The best way to help the poor is to give to the rich!”

“Some heroes wear capes, but our heroes prefer suits and ties.” The plutocrat in the audience raises his glass. “To our (public) servants! Such a concentration of wealth would not be possible without them.”

Not wanting to be typecast for the role of Igor — infamous for the catchphrase “yes, master” — other shills and hacks prefer to play more dignified roles: They find it to be more gratifying to act the part of “intellectuals.”

A bit like a wolf in sheep’s clothing, the shill in intellectual’s clothing has a more enlightened and literary facade. This enables him to more effectively gain the trust of others. In costume, like the wolf in Little Red Riding Hood, he preys on credulous and unsuspecting targets.

“Oh Granny, what big donations you have!”

He is adept at pretending to be “objective” — ostensibly he has no dog in the fight. He’s just here to share his wisdom. He will often have an advanced degree, which lends him more credibility. This is why he is sought out by partisan “research institutes” and other “foundations” (usually with words like “freedom” and “liberty” in their name) who endeavor to propagandize.

The “appeal to authority” makes us focus less on the evidence for his particular assertions and more on the prefixes and suffixes attached to his name. You may notice this when he is invited on political talk programs to share his opinion: “Here to tell us that our president is a genius is Dr. so-and-so,” and “Up next, so-and-so Ph.D. is here to tell us all about the makers vs. the takers.”

Of course, as an advanced degree generally indicates a better knowledge and understanding in a particular field, it makes sense that we value the opinions of someone with an M.D. or Ph.D.; however, erudition notwithstanding, a person with a degree is obviously still capable of being illogical and deceptive. There are innumerable paid shills who are doctors and scientists.

The ranks of the bought priesthood are filled with disingenuous “authorities” who have no desire to inform — in fact, they have more of a talent for the fine art of misinforming. They don’t necessarily have to receive money directly from some “puppeteer” — as beneficiaries of the existing state of affairs they have a vested interest in making sure the economic and political system isn’t tinkered with too much (allowing, of course, for a bit of innocuous social change here and there). It is not uncommon for these status quo apologists to cherry-pick data which helps their case and to ignore data which hurts their case — many of them are, in fact, professional lawyers.

If you’re ever unsure about whether or not someone may be shilling for this or that group or industry, try to focus not only on what he condemns but on that which he is too afraid to condemn. He may spend a great deal of time and energy on denouncing corruption (like the corruption of his adversaries), but he will turn a blind eye to the corruption that lines his pockets. He may invoke, with crocodile tears, the people who have died because of some other ideology or economic system, but he will omit, unabashedly, the people who have died because of the doctrine to which he subscribes. This is the kind of hypocrisy which helps to separate the wheat (the honest intellectual) from the chaff (the intellect/shill).

One could argue, because we all have vested interests, we all shill (to different degrees) for that which benefits us the most. Consciously or unconsciously, it appears we all have a propensity to promote the political ideas and economic systems that increase the probability of our own survival and advancement. However, for some who have no conscience, avarice knows no bounds.

To help curb this behavior, it’s high time that we created an 11th Commandment. (No, I’m not talking about Ronald Reagan’s 11th Commandment: “Thou shalt not speak ill of any fellow Republican.”) How about, contrary to the decree of the Jelly Bean Man, we simply inscribe: “Thou shill not.”