Picking blueberries is on my list of Favorite Things About North Idaho. I hasten to assure local huckleberry aficionados that I am not dissing their obsession. Indulging in those tiny bursts of intense flavor leave my hands (and face) as purple as anyone else’s. The problem is that I have a short attention span and a tendency toward instant gratification — which means that huckleberries rarely make it back to my kitchen. Like a summer sunrise, I savor huckleberries in the moment.

A u-pick blueberry farm is a very different experience. When I see those neat rows of blue-laden branches, my Midwestern farm girl takes over. This becomes the harvest, filling the larder for the dark days of winter. This is serious business. 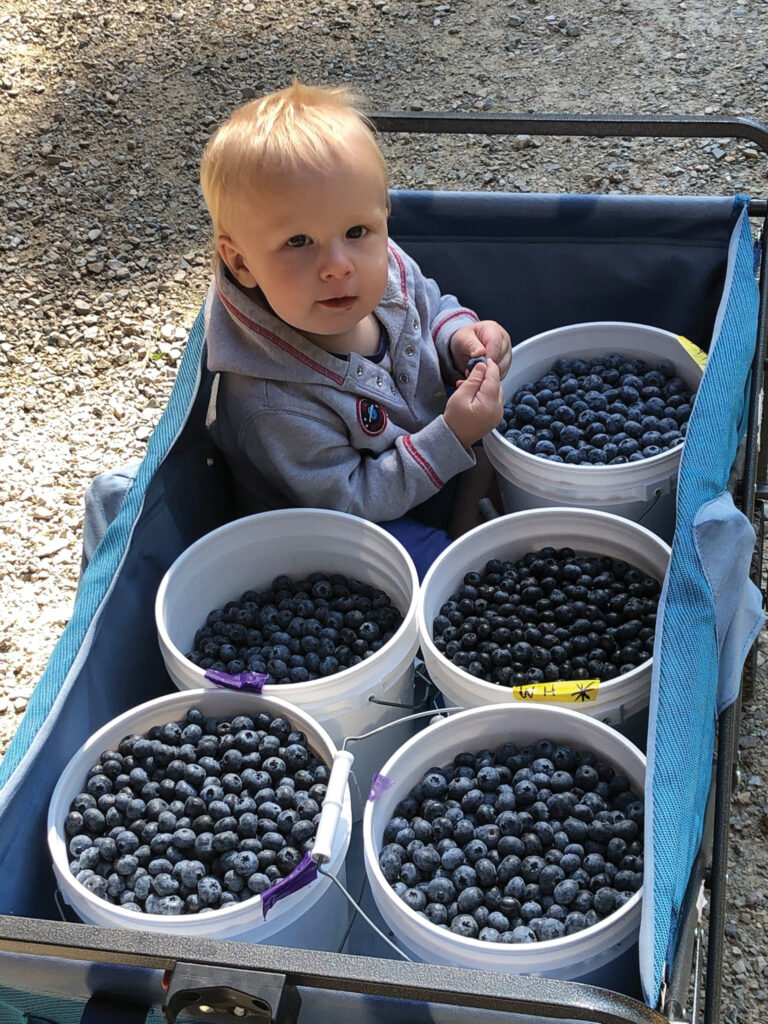 Berry picking can be approached in several ways. Some use it as a family bonding ritual or social recreation. In one row, grandparents share stories of their youth. In another, adolescent girls mingle talk of 4-H competitions with descriptions of their worst hair days. The wanderers pick a few of the largest berries from each bush, then move on in search of the motherlode. Friendly competitors check each other’s progress with banter and laughter. Others show up alone and get the job done, methodically stripping every bit of blue from each bush.

K (my husband) and I practice blueberry picking as a martial art. We don our traditional loose clothing, which must include a belt. Few words are spoken as we hasten to our destination in the early morning hours. Caffeine is the ritual substance to be consumed along the way. Once we enter the blueberry field, there is a ceremonial scan to select the day’s best arena. We stop, attach the berry buckets to our belts, then glance at the time. The contest begins.

In the beginning, I was K’s sensei, carefully explaining the delicate movements of the thumb roll and the complicated two-handed interior pluck. Several years of practice have made K an honorable opponent, though he has not yet surpassed me. I may continue to triumph, but that is only because I was schooled by one of the greatest masters of all: my mother.

My siblings were grown and gone by the time I was an adolescent. It just so happened that my teenage years coincided with the pinnacle of mom’s food-gathering proficiency. To my dismay, I was thrust into the apprentice role for her avocation. The only way I could escape my duties to hang out with my friends was to hone my own skills until I equaled her efficiency. By the time I left home, I could almost pick berries in my sleep — indeed, I remember at least one nightmare featuring never-ending buckets of berries.

It is curious how the dutiful drudgery of youth becomes a treasured memory. Mom has been gone a long time now, but the annual blueberry rites are a memorial to her life.

After a couple of hours, the rising temperatures remind us that it is time to conclude the match. It is time for the final score, measured in pounds. K always adds a few surreptitious handfuls on the way out — a vain attempt to weigh the scale in his favor. But the final numbers don’t lie, so my ranking is intact. Congratulating each other on an honorable contest, we head home with another 20 pounds of blueberries.

In the finest tradition of the sport, the winner will make the pie.