Pearl Island: From family homestead to island for the people

The view from the Jamieson’s dining room table is familiar but still breathtaking. 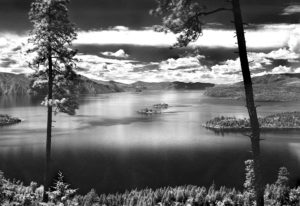 Beyond the curtains and glass lies Lake Pend Oreille, sprawled out beneath the Hope hillside. Punctuating the dark blue water are distinct islands: Warren, the largest, is most near; Cottage and Pearl sit just to the left; and Memaloose hides behind the Hope Peninsula.

It’s Pearl Island that Lexi Jamieson cares about most, or, more specifically, the last person to own Pearl: her sister, Lorraine van Schravendyk Haecker.

Jamieson pours over photographs and letters at the dining room table, detailing Lorraine’s life, flipping through binders to find certain dates. Jamieson inherited this Hope house from her sister, and with it, stacks of history she’s determined to organize. While Jamieson catalogues her sister’s legacy in binders, another part of Lorraine’s legacy lives on within view.

The story begins in 1900, when Henry van Schravendyk made Hope the final destination on his journey from Holland.

“So, in the year 1900 I first set foot in Hope,” he wrote later in his life when asked by schoolchildren about the town’s history. “As many others, beginning the new century in a new dwelling place and with a new outlook on life. It was in the autumn … Attracted hither by the prospect near this beautiful mountain lake which the ‘Old Timers’ have come to know and love so well. Life was still new with much to look forward to, with some troubles and sorrows in retrospect, but not too much to regret.” 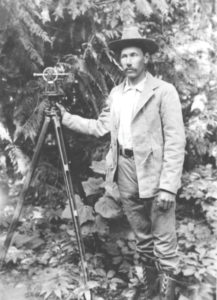 He set roots on the 10-acre Pearl Island, receiving his official homestead certificate in August 1907.

“The little place I call home is a unique little spot. It is a little island out in one of the most beautiful lakes in the world,” he wrote, adding that the climate in Hope was mild and the island had wildflowers from March to December. “At present it is roses and wild hyacinths. I have quite a number of fruit trees planted and take delight in watching their growth. The cherries are as large now as garden peas and are in such quantities that I think I shall have to ‘prop’ the trees.”

Henry’s parents came from Holland to live with him. His mother, Anna van Schravendyk, also described the mild climate and flowers to her sister through letters, adding that the soil seemed very fertile and she’d been able to grow potatoes “as big as a milk jug.” She also wrote about early Hope tourists.

“As the countryside here is so beautiful, many strangers come here in the summer, sometimes also for their health, they imagine they’ll be strong and healthy here,” she wrote to her sister in 1908. “As you know, rich people have their whims and so they’re walking in our pine-forests, breathing the air and they feel their lungs growing stronger everyday. We are patient with them, they pay well for … eggs and vegetables, but it takes a lot of time, for they have nothing to do and the Americans love talking.”

Henry married Augusta Beck in 1909, and they lived on Pearl for a short time in a two-story house. However, living on the island was determined unsafe since it is mostly below the 100-year flood plain, so the family barged the top story of the house to the mainland where it still sits today on Ridgewood Avenue. This would become the home where Lorraine van Schravendyk Haecker grew up. 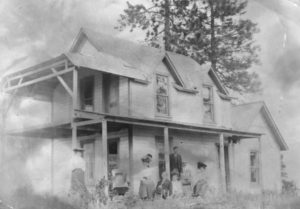 Lorraine was born in 1916 in Dover. When her mother left her father alone with three children under three years old, she was sent to live with grandparents in Kootenai. After the grandparents opened a grocery store and determined it wasn’t an appropriate place for a little girl, Lorraine ended up with her eventual adoptive family: the van Schravendyks of Hope.

She spent much of her youth on the island and always dreamed of living there. In 1949, on her 33rd birthday, Lorraine received Pearl as a gift.

After living elsewhere for most of her married life, the Haeckers — Lorraine and her husband, Ed — moved back to Hope in 1972 and began building the house Jamieson would eventually inherit. That same year, Ed died. Lorraine lived in Hope until her death in 2008. Jamieson said Lorraine was deeply involved in the community, particularly with the cats at the Panhandle Animal Shelter.

In her will, Lorraine said she wished to have the island transferred to a conservation entity chosen by her cousin, Jeanne van Schravendyk Green. In 2009, Pearl made the transition from private family homestead to wildlife management area under Idaho Fish and Game.

Chip Corsi, regional Idaho Fish and Game supervisor for the Panhandle, said Pearl has traditionally been home to nesting eagles. While overnight stays aren’t permitted on the island, day use is encouraged. Corsi said it’s a good spot for a picnic or nature-watching excursion.

“It’s a neat thing,” he said. “The islands are interesting and kind of unique, and when you have one that’s undeveloped like Pearl it’s fun to go poke around.” 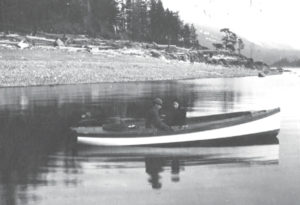 Henry van Schravendyk and his mother, Anna, on one of the first motor boats in Lake Pend Oreille, “The Lady of the Lake.” Photo courtesy of Lexi Jamieson.

Lorraine’s ashes were spread on Pearl, and a plaque mounted on the island reads: “Pearl Island was donated to the State of Idaho by Lorraine Haecker in July 2009, and is dedicated to her memory and the memory of Augusta and Henry van Schravendyk. The island will remain unchanged and available for both wildlife and the public.”

Henry wrote in the history for the schoolchildren that Hope was home to people both born there and those who found it and made it their chosen home, like him.

“Yet all were destined to take part in the drama of life for which nature has set the stage at a time so dizzily remote that even the old hills can tell but part of the story,” he wrote. “For, without doubt, The Almighty has planned that in this beauty spot Man shall see some of his worthiest aspirations fulfilled.”

Author’s Note: This story would not have been possible without the guidance of Lexi Jamieson. She provided the bulk of the information in this story in hopes that more people will know what future her sister wanted for Pearl Island.