Di Luna’s Cafe has a great reputation as one of the best listening rooms in Sandpoint for live music. This weekend, the intimate atmosphere will be matched superbly by an indie folk-rock trio from Colorado called Edison.

Featuring singer/guitarist Sarah Slaton, multi-instrumentalist Dustin Morris and Grammy-nominated guitarist Maxwell Hughes (formerly of The Lumineers), Edison is embarking on a tour of the west to share their music. According to Slaton, persistent touring is right in their wheelhouse. 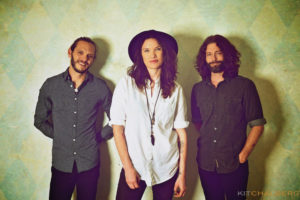 “We’ve just been touring nonstop, living on the road,” said Slaton. “We kick it off in Denver and make a West Coast run for the next two weeks. It’s fun to get out and hustle and meet as many people as we can.”

“We’ve all been friends forever,” said Morris. “All of us have been in this game many years. ”

Morris began playing with Slaton in 2014 while with another band.

“We went on the road together, backing up Sarah, and I just fell in love with her music,” said Morris. “It was really refreshing.”

Hughes came to the band after meeting Slaton through a nonprofit they both were active in which was designed to cultivate and promote Colorado artists.

“I was one of the artists on the roster and Sarah and I bonded and decided to do a co-headline tour at SXSW,” said Hughes, who was nominated for a Grammy for his stint playing mandolin with The Lumineers.

“We all came from such an eclectic background,” said Morris, joking, “You don’t have to call us a supergroup, but you can if you want to.”

While the band is relatively new, the trio has gained a following, mainly through the impact of their dynamic live performances. They have played the popular Austin music festival SXSW, the CMJ Music Marathon and the Folk Alliance International. They’ve shared the stage with Iron & Wine, opened for Nathaniel Rateliff & The Nightsweats, Andrew McMahon – they even played with Sandpoint’s own Shook Twins while they played with Langhorne Slim.

The single “Open Road” from Edison’s 2016 release “Familiar Spirit” was even able to chart in the top 200 non-com charts.

But, as the band notes, some of their best shows take place in small towns.

“Yeah, it’s really hard to tell if anyone likes your music in New York or L.A.,” said Hughest. “Nobody will be moving or reacting, but after they’ll come up and say, ‘That was great.’”

The trio is currently working on a follow-up album, with plans to introduce some of the new songs during their tour.

“The new album is going to be really cool from the bottom floor up,” said Morris.