Hackbarth returns for another Panida show

Last year, the Andy Hackbarth Band played at the Panida as part of the Pend Oreille Arts Council’s Performing Arts Series. This year, the band’s leading man returns with an entirely new sound.

“I love the Panida, it’s a gorgeous theater,” Hackbarth said. “When you’ve toured for years and years and years, when you have the opportunity to choose the towns, Sandpoint — the people there and just how gorgeous it is — it’s my choice.”

Hackbarth’s show this year falls on Thursday, Nov. 9 at 7:30 p.m. at the Panida Theater. The show is called “A Tribute to Segovia,” an homage to Andres Segovia, the “father of the classical guitar.” Hackbarth said he talks about Segovia’s influence on modern music and how Segovia’s work has changed the contemporary guitar world. 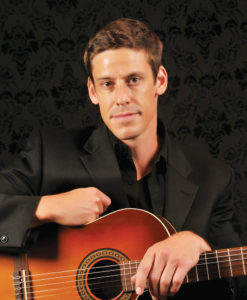 “There will be a lot of instrumental songs, but I’ll sing, too. And there will be a few surprises, like some Metallica and Johnny Cash,” he said. “It’s sort of all over the place as far as content, but the theme is consistent in that it is classical guitar.”

Although a lot of his original music is of the singer-songwriter genre, Hackbarth said he’s played classical guitar since he was a kid.

“Spanish and Southwest- American guitar music is beautiful,” he said. “The timing was right for switching up the tour and giving people another look.”

Hackbarth said the “timing” of this tour comes as a couple of his regular band mates are having kids and getting married. In going on a solo tour, he said he hoped to showcase his love of genres beyond just the jazz and pop sounds that tend to characterize his band’s shows.

“I didn’t want to stop. I’m so used to being in motion now, constantly, it feels weird for me to be in one place for too long,” Hackbarth said, though he admitted touring alone is a different experience. “For the people who have seen the band play a few times over the past few years, I wanted to give them a different look this year. That was sort of the most important thing.”

See Hackbarth play the Panida on Thursday, Nov. 9 at 7:30 p.m. Tickets can be purchased at the door or online at panida.org/event/andy-hackbarth for $15.