Making a difference as a nontraditional teacher

There is a serious and on-going teacher shortage in Idaho. This is not a problem unique to our state, but one that is especially acute in our local area. 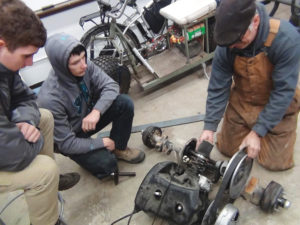 College students are simply not enrolling in teacher-education programs, especially those related to the desirable STEM courses – science, technology, engineering, and mathematics. Subsequently, Idaho has introduced alternative paths to teacher certification, allowing people with the right technical credentials to transition into a career as high school teachers. This is how Marty Jones became part of the Clark Fork Jr/Sr High School (CFHS) community.

Like many new residents of Idaho, Marty is part of the large and ongoing California diaspora. He discovered his new home near Sandpoint entirely by accident. He and his wife, Jenny, were traveling through the area when they realized that this was the place where they wanted to live. Thinking that they would invest in a second home somewhere in Bonner County for their future retirement, they quickly came to realize that they did not want to return to Southern California. So they stayed. The rest is history.

Marty was born to a ship’s captain, a man who served in the Merchant Marine. And we are talking old school: the man plotted his position at night in the open ocean using a sextant and star charts. Marty possesses this sextant today, and he also knows how to use it.

After he left the Merchant Marine, Marty’s dad started a tugboat business in Long Beach, California. This is where Marty was exposed to the world of boats, ships, and other ocean-going craft. His family’s business also built boats, such as tugboats.

As a consequence of growing up around boats and ships, combined with a natural bent toward engineering that he expressed even as a child, Marty attended the University of Michigan where he earned a degree in nautical architecture and marine engineering. After completing his degree, Marty took the helm of the family tugboat business.

However, after some decades he was ready for a new adventure, and that is how he found himself as a science teacher at CFHS, a position he would hold for nine years. 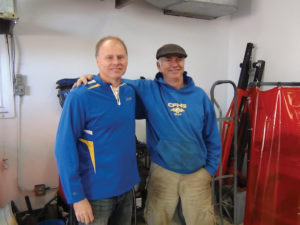 CFHS had been desperate for a replacement science teacher, but no one applied. Rural and remote schools like CFHS have an especially difficult time finding teachers, any teachers. And STEM teachers are especially out of reach. In stepped recently-retired former nautical architect and marine roustabout Marty Jones. During his time as CFHS’s science teacher, he taught the usual science courses plus a few select electives, such as physics, astronomy, and an “invention and design” course. On top of this schedule Marty was also leader of the new Tech Track, part of CFHS’s experiential-learning track program.

Marty is uniquely qualified and capable to help students get the most out of the Tech Track. The Tech Track is a wide-open experiential-learning track and appeals to students who have a penchant for making things. They can build with wood, or weld with steel; program a computer or construct a robot; repair an automobile engine or replace the clutch in a dirt bike – Marty has skills, experiences, and expertise in all of these areas and more. He is the jack of all trades, yet master of many of them to boot!

Then Marty retired. He was going to return in the fall as a community volunteer to lead the Tech Track program, but he was finished with teaching. Or so he thought. When he learned that CFHS was unable to find a replacement math teacher, Marty returned to fill the void. The school’s former science teacher was now its new math teacher.

Marty recalls his ongoing discussion with school principal Phil Kemink: “I stayed in contact with Phil during the summer and after failing to find a suitable candidate for the math position, he asked me in an offhand way ‘do you want to come back to teach math?’ I responded with a chuckle that, ‘Stranger things have happened.’”

Marty saw teaching math as a new challenge and felt that he could really help students be successful in what most of them considered to be their most challenging course.

Marty continued as the Tech Track leader and his leadership was greatly appreciated by students. They relished each Friday. But it was not enough. They wanted more. The one-day-a-week opportunities to ply their hands and minds with the challenges and rewards of technical education were enjoyable, but also frustrating. Could they not have a technical education elective every day? If only CFHS could secure a certified shop teacher.

Phil Kemink, the principal at CFHS the past 14 years, was delighted with Marty’s leadership of the Tech Track.

“It was exciting to me that he was reaching kids in a non-traditional manner, (in ways) that they hadn’t been reached before,” said Kemink. But he was also aware that the taste of success in the Tech Track led the students to want more.

Phil had an idea. He asked Marty if he would be willing to become a Career Technical Education teacher at CFHS. This would require Marty to take additional training and coursework, but Marty accepted. The science teacher-turned-math teacher was now going to become a technical education instructor. Kemink was pleased as well.

“We hadn’t been reaching a certain student demographic in the past, and this (CTE program) has allowed us to do so, with more one-on-one focused structure,” said Kemionk.

KC MacDonald, the experiential-learning track co-developer and a social studies teacher echoed Phil’s words: “We gave our kids a voice. What do you want? What types of classes at CFHS would help you to meet your personal goals? And Marty stepped up. We didn’t need to go searching for the right person. We found our guy in our own math classroom.”

Perhaps this ongoing teacher shortage is not necessarily a bad thing. Because of necessity, folks with lifetimes of experiences and expertise are entering public education. But at a very local level, CFHS got Marty Jones. Score!