‘In Pieces’ is a celebrity memoir at its most honest

Asking a reader to name her favorite book of the year is like asking her to choose her favorite grandchild. Impossible. I won’t quite follow the rule here, but I’ll only cheat a tiny bit, just a paragraph or two. Fortunately, I’ve already written earlier in the Reader about my number-one book of the year, “Educated,” by Tara Westover, so no need to do more than this reminder: a gripping true story of a young woman raised in eastern Idaho without any schooling who, by force of will, finds her way to college and a Harvard Fellowship. 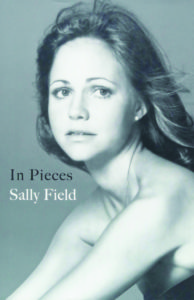 I also wrote recently here about another 2018 book atop my list: “Overstory,” by Richard Powers. It’s a must-read novel for anyone who cares about trees and is ready to invest time into a sprawling and dramatic story of an unusual collection of people and their efforts to save a forest. Trust me, this is not a paean to tree huggers.

For most of this year, I’ve been reading memoirs. And, what do you know? A just-published memoir, “Becoming,” by Michelle Obama, is already the best-selling book (of any genre) for this year. Yes, I bought it, too. And loved it.

But there’s another celebrity memoir published this year that is even better and more surprising. “In Pieces,” by Sally Field goes deeper into her life story and touches more nerves. This is not a fluffy tale of a young starlet television viewers first came to know as Gidget. With this book Field arrives on the literary stage as fine writer who tells her story with intimacy and raw honesty. It’s a story about a shy young girl who eventually overcame personal and professional obstacles to soar in numerous memorable and award-winning roles, including Sybil, Norma Rae and, in 2012, opposite Daniel Day Lewis in Lincoln, as Mary Todd Lincoln.

Field was raised in a family that lived and worked on the periphery of Hollywood. Her mother had a short acting career, and her step-father was a movie stuntman who molested her as a young girl. Field does not gloss over any of this or her later failed relationships; instead she dives deep to reveal the lack of self-confidence that resulted. She survived middle-school humiliations and lack of close friends in high school by discovering the drama department where, she writes, “I felt most alive…Like a thirsty person needs a glass of water, I needed to explore this world of acting.”

Success, which came at age 18 with television hits “Gidget” and soon after “The Flying Nun,” was soon complicated by marriage (to a longtime friend), motherhood and, eventually, Hollywood gossip. Field doesn’t shy away from any of it, writing in vivid detail and emotional depth of the constant stress of being a mother and making enough money to support the family. Like many women of that time — the late ‘60s and early ‘70s — she felt her “restless generation pushing me to rethink everything I had always accepted as ‘the way things are.’” The seeds of feminism are sown. The reader sees those seeds flourish later as Field becomes a fierce advocate for herself in the seeking out roles and getting auditions.

Field gives “In Pieces” additional depth by layering a consistent theme underneath the narrative flow of the her story — her love and ongoing attachment to her mother, who she calls Baa. She begins and ends her story writing about Baa, the ever-present longing for her, and finally her death. It’s one of many touches that lifts Field’s memoir well above the ordinary.

Mindy Cameron, a former columnist at the Seattle Times, now lives in Sagle where she is writing a memoir.