Shake, Rattle and Roll: A column about the trials and tribulations of Parkinson’s Disease

“Every champion was once a contender who refused to give up.” ­­—Rocky Balboa

Blonde Bombshell, cornerman for Bald Bomber, is busy taping up his hands in preparation for the most important fight of his life—going into battle with his nemesis, Parkinson’s disease. The Bomber doesn’t have to beat the disease, he just has to stay in the ring for all 13 rounds. PD is chronic (it isn’t going away) and progressive (it will get worse) and there is no cure. 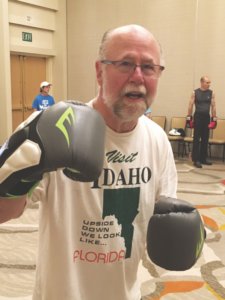 Rocky: No, maybe I can’t win, maybe the only thing I can do is just take everything he’s got.

Why the alliterative names in the opening line? A new program is coming to Sandpoint next month thanks to a partnership between Bonner General Health and the local PD support group PowerPAC. It’s called Rock Steady Boxing, and it is one of the best and most complete therapies for us people with Parkinson’s (PWPs).  The RSB mission is to empower people with Parkinson’s disease to fight back. PWPs don’t really box each other, but we do use sparring pads, heavy bags and speed bags.  A major component of the program is exercise. Use it or lose it, although a hackneyed phrase, is especially true for Parkys. As the disease progresses—and it will—flexibility, balance, eye-hand coordination, strength, agility and the ability to move are compromised. According to ESPN, boxing is the most physically demanding styles of training. Pushups, jump rope, obstacle courses, jumping jacks, jogging, lunges, crunches and sparring comprise a typical class. Various studies have shown that RSB slows the progression of the disease and improves our quality of life.

Rocky: All I wanna do is go the distance.

If this was an infomercial on TV, right about now, I’d say something like, “But wait, there’s more! And, there is more. Parkys, for a variety of reasons (depression, drug side effects or embarrassment), frequently become more and more socially isolated. When combined with apathy you have a recipe for a downward spiral. Rock Steady Boxing is a social activity. Two to three times a week, we’ll be together — supporting, encouraging and coaching each other. Classes last from 60-90 minutes. PWPs get the benefit of physical activity in a positive group setting. We’ll even bring our own soundtrack. My workout play list includes Celebrate (Three Dog Night), We are the Champions (Queen), Shake Rattle and Roll (Bill Haley and the Comets) and Twist and Shout (Beatles) — yes, all moldy oldies.  I’m entitled, I survived the ‘60s! There’s nothing like smashing a right cross at the heavy bag while channeling your inner Muhammad Ali

Back to our infomercial because there’s an added element to RSB that was surprising to me. Boxing is a cognitive activity. There are several exercises that challenge the mind. For example, while sparring with the coach, numbers are called out relating to different punches. A left jab is one, a right cross is two, a left uppercut is three, while a right uppercut is a four. Someone will call out random numbers, and boxers follow the sequence. Sound easy? I can guarantee it’s harder than it sounds. When I participated in a RSB class in San Jose, I felt utterly foolish as I attempted to follow the sequence. As I looked around, most of us were flailing around trying to match punches with their numbers. For some of the other exercises, you may be asked to reverse left and right. At first, it’s all confusing — and hilarious to watch. Laughter is good medicine, and there are plenty of opportunities to laugh. That’s laugh with, not at!

Rocky: Remember, the mind is your best muscle.

Most Parkys (like just about everyone else) hate to exercise. For us, however, the consequences of not exercising may be especially severe. I want to avoid a cane, a walker or a wheelchair for as long as possible. I don’t want to keep upping the dosage of my meds until the side effects of the drugs are worse than the disease. I don’t want to be a burden for my lovely wife or other family members. I want to have the best possible quality of life. Knowing RSB can help slow the progression of my PD, the choice is simple

Rocky: You know what you have to do. Do it.

After being diagnosed with Parkinson’s Disease, A.C. is calling on his 37 years in K-12 education to became a “Parkinson’s Warrior”educating the public, advocating for a cure and participating in research.