Pet peeves of the people

How those minor annoyances could actually be a healthy thing

A few weeks ago, we assigned our “(Wo)Man on the Street” columnist Susan Drinkard her weekly question: “What are your pet peeves?” Little did we know what a rich vein of material we were tapping into with this question. 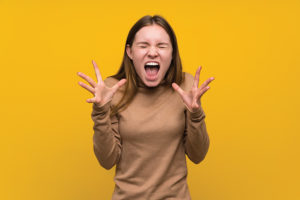 Immediately after receiving the email, Drinkard replied with a top-10 list of her own pet peeves: “Being treated like I am invisible because I am old(ish)”; “When men spit in the parking lot of grocery stores and you have to look at it to step over it”; and, “Children screaming in stores,” to name a few.

Then, after bringing up the subject with a passerby on the sidewalk, we noticed how their eyes lit up as they launched into a laundry list of their own peeves. We repeated this experiment again and again that week. The consistent result: People brightened considerably when asked about their petty annoyances.

Intrigued, we posted the question to the Reader Facebook and braced for the usual flood of rude, demeaning or otherwise snide comments that seem to typify social media interactions. Instead, we saw scores of comments from readers who really got into the spirit of the question.

Belittling and trolling comments were replaced by helpful witticisms and playful exasperation. It was almost as if people saw each other as fellow human beings, rather than mortal partisan enemies, because all shared in the minor foibles of daily life. Weird.

Bartender Racheal Baker wrote, “Waiting very impatiently at the bar for a drink (waving me down) then I walk over only to listen to you humm, and tell me you haven’t decided what you want yet.”

Mel Davis included a few of her own: “Not putting away shopping carts. Not using the blinker. Newbies moving here complaining about everything, asking silly questions that Google has the answer for.”

Some peeves were downright specific, like Natalie Grace Larson, who wrote, “When businesses, or movies use default Microsoft Word fonts. All the free fonts in the world and you had to pick Papyrus?”

“When you’re at a music concert and the person standing next to you films the WHOLE THING with their phone,” wrote Nellie Lutzwolf.”Why are you even at the concert? … Just let me feel the music and head bang in peace – geez-ah.”

Some of the most common grievances included people who chew with their mouth open, bad parking etiquette and shoddy driving habits. One big takeaway: Use your blinker.

“Most people that I have to share the road with peeve me but I’m especially passionate about the ones that don’t use their blinker,” Abby Tighe wrote. “I have special words for them.”

On parking, Glenn Lefebvre had this to say: “The downfall of Western Civilization is apparent in grocery store parking lots.”

It turns out there is a simple reason why people enjoy sharing their pet peeves with others: We all have them.

Dr. Joe Wassif, a psychologist at Bonner General Health, weighed in on why he thinks talking about pet peeves can actually be a healthy way to communicate with others on equal ground.

“One of the things I love about pet peeves, it’s an area of mental health that people can laugh at themselves about,” Wassif said. “They know it’s their own thing, but we all have some pet peeve to an extent.”

Many mental topics are by nature treated with gravity — suicide, depression or psychological disorders, among them — but pet peeves tap into something we all share, while doing so with a bit of levity.

“It’s a little more front country,” Wassif said. “It doesn’t make us feel that we’re crazy, because we all have them, and a lot of them aren’t for great reasons.”

Wassif noted that while pet peeves are usually discussed in a light-hearted manner, they do have the potential to cross into areas of a diagnosis if taken too far.

“It can touch up against OCD qualities, obsessive thoughts that don’t necessarily turn into compulsions, where people have an obsessive quality of just walking in the door and anticipating this thing,” Wassif said. “Or having a hard time having it escape their mind. From that lens, it can become somewhat diagnostic.”

As an example, Wassif remembered a former co-worker with echolalia, “where certain sounds would drive her crazy, like chewing ice. She would go to all these … gatherings and someone would be there jiggling ice in the glass or chewing it and it would just impede her work.”

Wassif also pointed out that it is common for those on the autism spectrum to have highly specific sensitivities, such as wearing clothing made from certain materials or being in a room lit by fluorescent bulbs.

For the most part, however, people who hear about others’ pet peeves usually treat them as a humorous, sometimes eccentric personality trait and respond by sharing an equally humorous peeve of their own.

Wassif shared how a couple of pet peeves play out in his own home.

“Growing up, we were always told to, ‘Turn off the lights.’ Now it’s my turn to do that to my kids and my wife,” he said. “My wife is another therapist in this community, so we have this really funny way of arguing with each other. … Her dad used to say to her, ‘Go the distance,’ you know, go a little further and do that extra thing. Like turning the lights off. So I’ll say that to her: ‘Go the distance.’ It drives her crazy.”

On Facebook, some readers pointed out peeves that many related to, such as Mike Brown, who wrote, “Bicyclists not following traffic rules and keyboard tough guys.”

Sam Cornett made a splash after writing, “Coming to the stop light heading east on Hwy 200 and Kootenai Cutoff where it turns into two lanes, I constantly lose the redneck drag racing towards McGhee Road where it turns to one lane. For clarification, I am in the left lane… the conservative and conformist lane. The lane that says, ‘I am at peace with myself and love others.’ The right lane is reserved for impatient people who cut in line at public bathrooms and piddle on the seat… it’s Sandpoint’s very own Fast and Furious racing league.”

Others were a bit more esoteric.

“Parents who name sons ‘Travis’ or ‘Colt’ or ‘Cody’ knowing full well they’ve condemned their sons to a life of petty crimes and incarceration,” wrote Bob Salsbury. “It’s the ‘Triad of Recidivism’ and it needs to stop.”

For now, pet peeves will hopefully remain a common denominator through which folks can laugh at themselves and others without fear of reprisal.

“I don’t think it’s unhealthy,” Wassif said. “To laugh at ourselves, that’s a sign of good health.”

I become violent when I hear people eating, but I’ve determined that’s misophonia — an involuntary reaction stemming from deeper anxiety. To label it as a pet peeve would be giving my desire to put people’s lip-smacking heads through walls a serious disservice.

Instead, I’ve decided to come out as the social justice warrior I am and share how much it peeves me when people scoff at the concept of political correctness. Using terms people prefer in regard to their sex, sexual orientation or race is a form of basic respect. Quit being offended because your Native American friend prefers not to be called an “Indian,” or because your queer friend would prefer you didn’t use “gay” as a synonym for “lame.” Words have power. Social rhetoric has a huge effect on how people see themselves, and in turn, how the world sees them. Once the initial shame of realizing maybe you were wrong or hurtful wears off, it’s possible that being a little more PC isn’t hurting anyone. And it’s a constant learning process — open and honest dialogue is a must.

In an apocryphal moment in the 1970 biopic Patton, George C. Scott as the eponymous general says, “I don’t like to pay for the same real estate twice.” Despite the fact that Patton never actually said those words, for some reason as a preteen history buff I absorbed the message over the course of about a thousand viewings.

If I leave something at home on my way to work, unless I’m standing on the front porch, I will not go back for it. I don’t care what it is. Get me more than 20 steps past a garbage can and I will hold on to whatever trash I’m carrying until I come upon another bin. If I’m absolutely forced to backtrack for some reason — say I skipped a Reader distribution point — it turns me into the absent-minded professor all day. It’s no way to live.

Speaking of no way to live, how do people slouch around — in public — wearing sweatpants? I’m sorry, did I wander into your bedroom by mistake? I also couldn’t help but notice you’re wearing the kind of flip-flops that my college dorm mates used to sport in the shower to avoid athlete’s foot.

The only acceptable occasion for that kind of dress is eating pizza bagels and farting your way through a binge session of The Chilling Adventures of Sabrina.