If North Idaho was a board game

What if North Idaho was a board game? How do you think it would look, and what exactly would be a good strategy to win?

In the interest of answering nonsensical hypotheticals, may we present to you a vision of what this board game would indeed look like. Welcome to “North Idaho: The Board Game.”

To start with, the board would be laid out in a circle, with Sandpoint in the middle as the end result, surrounded by rural “waypoints” spiraling inward. As game play advances, players can either pass through these waypoints undeterred or, as is usually the case, they might find themselves stuck by a train or until passing a series of more difficult mental and physical challenges. Such challenges include: “how to make sure your child has a sufficient education when Idaho’s per-pupil funding ranks among the lowest in the nation?”; “how to deflect an argument by waving a flag or revving a Diesel engine”; and, “which laws passed in Idaho were later ruled unconstitutional by the Supreme Court?”. 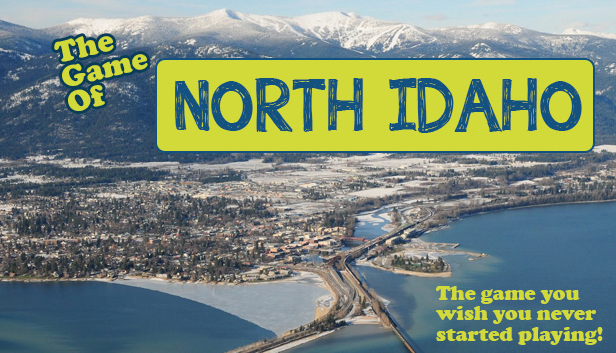 There would be a lake section filled with trivia about weed treatments, no-wake zones and stories of big fish from years past. Players in canoes and kayaks are at a disadvantage to the more wealthy players with powerboats bumping modern country music from a set of speakers mounted and pointed at quiet beaches surrounding the lake. Players would also pass through the “Facebook Forum Dead Zone” where they may lose several turns mired in conspiracy theories, aimless gripes about public art and traffic, intolerant observations disguised as jokes and a circular loop of arguments meant to distract the player from reentering the real world.

The “Local Politicians’ Corner” would offer quotes and actions from our elected representatives — including everything from reading comprehension tips from Bonner County Commissioner Dan McDonald to how to spot a listening device by Rep. Heather Scott to a “Which laws will the sheriff choose to enforce?” trivia section.

Before play begins, each player would be doled out Moose Money, with different starting amounts depending on one crucial factor: how long the player has lived in North Idaho. For those who were born and raised, they would begin with a meager stack of small bills and coins, as well as substantial debt and a low starting wage with which to pay their astronomical rent. Those who moved here in the 1990s and now claim to be “from here” earn a bit more to start with, including several gold pieces dug out of hidey holes in the backyard and a neat home bought at above-market value.

Players start off with big stacks of money if they recently relocated to North Idaho, with an extra payout if they’re from California and regularly tell other players to “go back to California.” They’ll get a leg up with the extra starting cash, but also a mansion on the lake and all sorts of toys with which they can torture their fellow players.

Those who moved here during COVID-19 to “escape tyranny” would earn the biggest starting wages, including a megaphone to broadcast their views to all the other players (as well as anyone else within 50 yards), and of course get extra moves despite their claims that they’re being “silenced.”

Players win the game by navigating the winding county roads and summer traffic jams leading into the center, finally crossing the Long Bridge to Sandpoint, where they earn the right to dog on everything and everybody, with each complaint taking a turn away from those who haven’t reached the middle yet. When — or if — everyone reaches the middle, the ones with the most money and loudest voices win, and the rest are given tin-plated medallions signifying that they played — and lost — a hell of a town… er, game. It’s just a game. Right?