Einstein has been located… in a Dumpster.

In the Sept. 28 edition of the Sandpoint Reader, former Sandpoint High School art teacher Dan Shook asked for anyone reading the paper to keep an eye out for a sculpture he created of Albert Einstein, but which went missing several years ago. 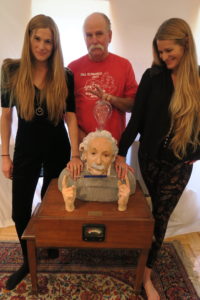 Dan Shook, center, stands with daughters Laurie, left, and Katelyn, right, next to the Einstein bust he created in 1991. The piece is titled “A Good Idea Gone Bad.”
Photo by Ben Olson.

The life-sized bust, which lit up and everything, disappeared from SHS after a long tenure bouncing around various classrooms, so Shook went on the bloodhound trail to find it.

We at the Reader are happy to report that Einstein has been returned safely to Shook.

“I got a call from a guy who said he read the article and knew where Einstein was,” Shook said. “He said he got it from a friend of his who found it in a Dumpster at the high school, like, four years ago.”

The caller was happy to return the sculpture to Shook, and it was mostly in good shape except for faulty wiring and some chicken poop, from apparently being stored among chickens.

“I can’t imagine who would do something like that,” Shook said. “Just throw away art like that.”

Shook plans to have the sculpture rewired by Ron Mende at Ron’s Electric, and, once it’s in working order again, will gift it to his daughters Katelyn and Laurie Shook.

“They’re moving back to town, so this is where it’s going to stay,” Shook said.