An interview with: Billy Gibbons of ZZ Top

ZZ Top is working on five decades of creating iconic rock jams, which is a feat not many artists can claim. The Reader caught up with frontman Billy Gibbons upon his return from the European leg of the band’s most recent tour to talk about inspirations, the logistics of beards and ZZ Top’s upcoming Festival at Sandpoint show on Aug. 4.

Sandpoint Reader: Next year, ZZ Top will have been making music for 50 years. I’m sure you’ve seen the music industry change drastically in those five decades. What’s one change that you see as good, and one that you could live without? 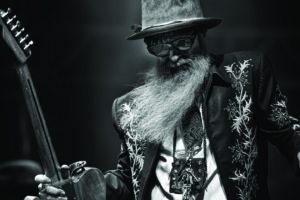 SR: A lot of folks associate your music with some of their best memories, and you guys are still rocking on tour. What’s it like being such an integral part of people’s music collections, and what inspires you to keep such a heavy tour schedule?

BG: Our secret, if you want to call it that, is we actually like what we get to do. Getting out and turning it up and rocking out with anyone who enjoys being part of it all is a truly joyful experience. And getting to get out and do-the-do leaves no room for complaining!

SR: I think it’s really cool you, Dusty and Frank have all been with ZZ Top from day one, especially in these days of bands breaking up and changing personnel every couple years. How did you all meet and what keeps you guys playing together?

BG: It’s no surprise to know we three came together with a mutual admiration of the many great individuals who created that mesmerizing art form, the blues. Followed with some of the best interpreters of the form, oddly from the U.K., such as the likes of Cream and Jimi Hendrix, and especially The Rolling Stones. We’re still absorbing a mass of inspiration, and that’s simply solid fuel for our fire.

SR: ZZ Top is known for the iconic beards (sans drummer Frank Beard, ironically). Where did that look come from, and why have you stuck with it? Do you have any good beard-related stories to share?

BG: I suspect the telltale term is, well, “laziness”…! We took a lengthy break making out to our separate destinations and upon reassembly, we were truly amazed (stupefied?) to see we had grown a set of rather admirable chin whiskers. These beards then became a constant subject of discussion — “Do we sleep with ‘em “under” or “over” the covers? Do they get in the way of fretting, picking or strumming?”… The answer, of course, is “Yes!” It’s definitely worth the sacrifice. Besides, it’s uncertain what lurks behind the briars and brambles.

SR: I read somewhere that you don’t sleep on beds, but instead on the floor. Is that an all-the-time thing? Is there a secret I’m missing out on?

BG: It’s mostly true. It’s a sure fire way to create the camping spirit even in a five- star hotel. It, ahem, keeps me grounded. In the world of constant touring and traipsing through strange territory, there’s solace in standing, [or sleeping], on solid ground. Guessing the mattress industry might prefer a slightly different take on the subject… Whichever way one finds a way into dreamland, go for it. Sleep is your friend!

SR: It seems ZZ Top has accomplished just about everything a band could ever ask for: a bunch of number-one hits, numerous best-selling albums, an induction in the Rock and Roll Hall of Fame. You were even named “Official Heroes for the State of Texas,” where there is also a “ZZ Top Day.” What’s next for the band? Anything big in the works?

BG: Well, right here in the heart of Boise is our stalwart guitar builder, Mr. John Bolin of Bolin Guitars. As we approach five decades together, Mr. Bolin and Co. are creating yet another round of fine instruments to celebrate the occasion. In fact, I have a new solo album, “The Big Bad Blues,” due to hit the street in September with a follow-up tour bringing along a truckload of Bolin’s finest! Gotta spank-the-plank in high Bolin style.

SR: Who is Billy Gibbons when he’s not the frontman of ZZ Top?

BG: He is a car-crazed, African art-collecting, Mexican food-loving average guy who just happens to play guitar and sing in a band whose sound appeals to quite a few. If you see me on the street, feel free to say, “Hey!” and you can see for yourself.

Catch ZZ Top at the Festival at Sandpoint on Saturday, Aug. 4.