The new map, titled L02, is available under the “maps” tab of the redistricting commission’s website. The map splits eight of Idaho’s 44 counties and has a population deviation of 5.91%, ranging from 3.77% below the ideal district population of 52,546 to 2.14% above the ideal population.

“I personally think it’s pretty remarkable that we are below 6%, at 5.91 deviation spread,” commission co-chairman Bart Davis said during the Oct. 28 meeting. “[Having] 5.91 and eight districts [split], I think that is really paying attention to ‘one person, one vote’ and it respects communities of interest and counties in a remarkable way and I hope our state values the hard commitment to that target.”

Redistricting takes place every 10 years using new U.S. Census Bureau data. The process is required by the Idaho Constitution and the U.S. Constitution to ensure political representation is as close to equal as possible. 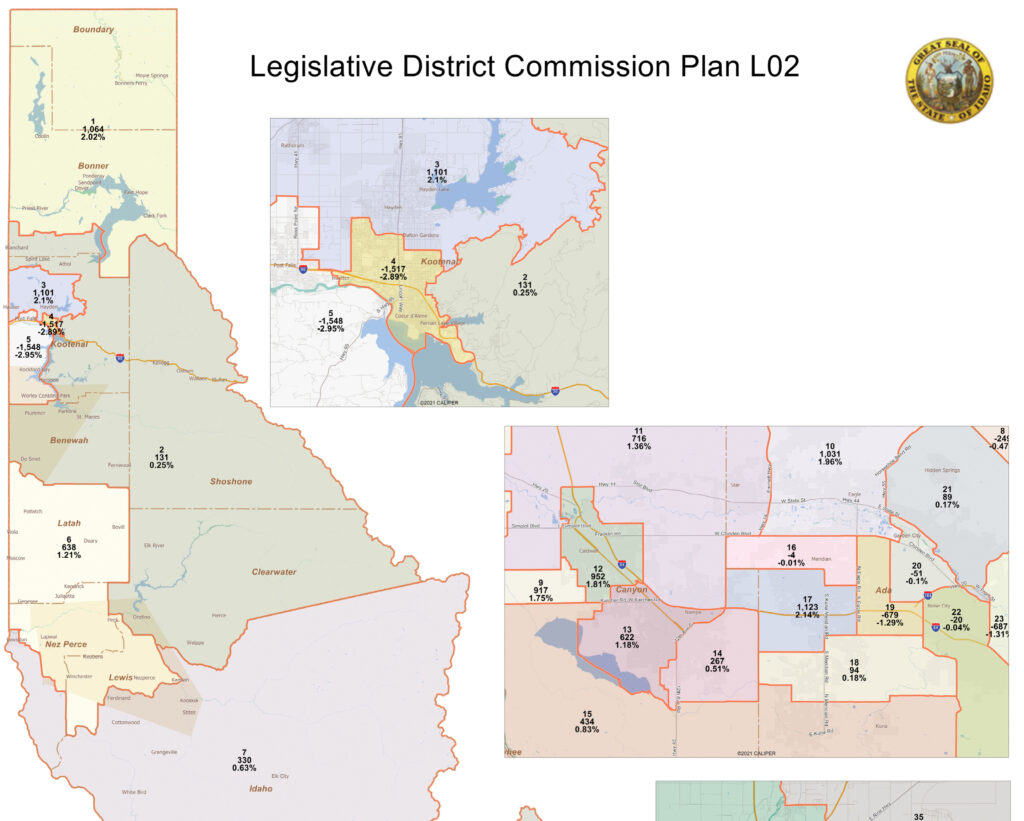 Idaho was the second-fastest growing state in the county over the previous 10 years, according to the 2020 census. But that growth was divided and uneven.

That’s why Idaho’s two congressional districts and 35 legislative districts need to be thrown out and redrawn.

The new districts would go into effect beginning with the 2022 primary election, scheduled for May 17, and stay in place for 10 years.

The six commissioners produced the new statewide map by merging three regional maps using the Maptitude software that has guided the process over the past two months.

The new legislative map wasn’t the only step forward Oct. 28t the Idaho Capitol. Commissioners also reached consensus on an unofficial goal to finish the redistricting process before the Nov. 30 deadline and the Nov. 15 special session of the Idaho Legislature.

Commissioners developed a timeline that could guide them through the finish line:

• By Thursday, Nov. 4, commissioners hope to have a new congressional map proposed and published online for the public to review.

• On Wednesday, Nov. 10, commissioners will meet at the Capitol and make any final changes to the new congressional and legislative maps and then, potentially, call for a vote that day on whether to approve maps and an overall redistricting plan to submit to the state.

“I had no idea how hard this was,” Davis said at the close of the Oct. 28 meeting.

Before wrapping up, Davis said commissioners would appreciate written feedback on the new legislative map.

The new map came gradually over the past few weeks following public hearings. Then things picked up somewhat unexpectedly.

Dan Schmidt, the other co-chairman of the commission, had nudged commissioners forward with a sense of urgency during meetings Oct. 27-28. Commissioners had just come back from a nearly two-week planned break. Commissioners started slowly Oct. 27 as a commission staff member known for his proficiency with the mapping software was out ill.

He felt better and returned to the Statehouse the next day to help commissioners merge their regional maps.

On Oct. 28, some commissioners were originally batting around a timeline that would have called for commissioners to put out the legislative and congressional maps next week.

But Schmidt asked about moving quicker.

“I was thinking maybe we could put it up tomorrow,” Schmidt told commissioners.

Commissioners have until Nov. 30 to approve the legislative and congressional maps and submit a redistricting plan to the state. The new goal of voting Nov. 10 gives commissioners some margin before the Nov. 30 deadline and before the Idaho Legislature plans to reconvene Nov. 15.

After the plan is voted on and submitted, it will go to the Attorney General’s Office for a review, commissioners and staff said. It will take a minimum of four votes from the six commissioners to approve the maps and plan. Idaho’s redistricting commission includes three commissioners appointed by Republicans and three appointed by Democrats. They have worked together, usually in bipartisan regional pairs, since Sept. 1.

But now commissioners know the plan will come under scrutiny. Because district lines were thrown out and redrawn, new districts are likely to lump together several incumbent legislators who were once representing separate, neighboring districts. Now, they will have to decide by the March 11 filing deadline whether to run against each other or step aside.

“We’re going to find out that we put friends to run against each other, at least if past is prologue,” Davis said.