Spencer James, a Bonner County man arrested in connection with a series of Sagle burglaries this summer, will face prison time following a plea deal.

District Court Judge Barbara Buchanan sentenced James, 31, to five years in jail Oct. 22, with two years fixed and three years indeterminate. Buchanan said the sentence took into account James’ cooperation with prosecutors and his history of drug abuse and mental health issues. But it also acknowledged the months of planning that went into the crimes, the number of victims and the thousands of dollars in damages.

For Sagle homeowners, the sentence provided some closure in an ordeal that caused neighborhood-wide frustration and anxiety. But the prison term may be cold comfort for some residents hoping for a harsher sentence. So many of James’ victims showed up to make statements at the 9 a.m. hearing that Buchanan delayed the sentencing until 2 p.m., although only one — who requested to remain unnamed — ultimately ended up speaking that afternoon. 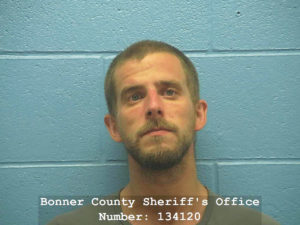 “I forgave the person who did this, thinking there must have been some reason for it,” he said. “But since then, I have found he has been doing this over and over and over again.

According to attorneys, James’ drug use and mental health struggles contributed to his actions. The burglaries took place during a time when James was essentially homeless, having contact only with his drug dealer and occasionally his mother. James also expressed regret for his actions. He said he wanted to get a handle on his drug problem and reconnect with his daughter.

Senior Deputy Prosecutor Dan Rodriguez recommended the five-year sentence in light of his cooperation with the state. Prosecutors struck the deal for three reasons: to close as many cases as possible, return stolen property and recover the stolen firearms floating around in the community. Rodriguez believes James and perhaps one or two others are responsible for most, if not all, burglaries in the area.

He also acknowledged homeowners’ desire for a stiff sentence while backing up the value of the plea agreement.

“They are rightfully upset, rightfully want a pound of flesh on top of their property back and frankly, I don’t blame them,” Rodriguez said.

Buchanan ultimately concurred with prosecutors’ recommendations. She acknowledged that James’ cooperation and comparatively limited criminal history spoke in his favor. The crimes themselves, however, were distinct in their planning, calculation and brazenness from the impulsive, drug-motivated thefts Buchanan has seen before. As an example, she said James disabled neighborhood utility infrastructure to shut down internet access, causing more than $10,000 in damage.

“I think in this case a prison sentence is appropriate,” she said.