The artists in repose

Edward Kienholz has been waiting 25 years for his driver.

The world-renowned artist was buried in his 1940 Packard Coupe on Howe Mountain in Hope after his death in 1994. Embalmed, seated in an upright position in the passenger seat with a dollar bill and a deck of cards in his shirt pocket, Ed rests. In the car with him is a bottle of Chianti and the ashes of his beloved dog. 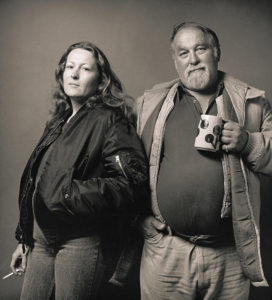 Ed’s burial was his final art installation, though incomplete until now. His wife, Nancy Reddin Kienholz, drove Ed into his grave — literally, in the driver’s seat — in 1994, then went on to continue their joint artistic legacy until her death last month.

“Nancy was always going to be the driver,” Ed’s son Noah Kienholz told the Reader, “so he’s been waiting for 25 years.”

Nancy died Aug. 7 in Houston at age 75. Because she died so far from North Idaho, her family opted for cremation rather than embalming. Still, Noah confirmed that Nancy’s ashes will make it to the front seat of the Packard, poised to drive Ed and herself the rest of the way into the afterlife.

As Nancy’s obituary appeared in national news outlets last month, most all made passing mention of her and Ed’s home and studio in Hope. Many North Idahoans knew the Kienholz’s as neighbors, though their international fame in the art world preceded them. Ed was making a name for himself as a provocative installation artist in Los Angeles in the 1950s and ’60s when he met then-29-year-old Nancy — a photojournalist at the time — at a party her mother hosted in 1972.

“I knew who he was,” Nancy told the Guardian in 2009. “You could not not have known who Ed Kienholz was.”

Ed’s work was making major waves, most notably his installation “Back Seat Dodge ’38” when it showed at the L.A. County Art Museum in 1964. The piece depicted a couple being intimate in the back seat of a car. It was the first of many times an Ed Kienholz original would create conversation, and according to a statement following his iconic installation “Five Car Stud” — which depicted six white men castrating a black man in a scene lit by five surrounding vehicles — that was the point.

“I should probably add that in my mind my work has always taken on a kind of life and identity of its own and as I push one way it seems to push back another. In this continuing internal dialogue I understand things better and do hopefully grow,” Ed wrote. “The conversation with ‘Five Car Stud’ is still very painful and slow, but one thing has been established for sure: if six to one is unfair odds in my tableau, then 170 million to 20 million is sure as hell unfair odds in my country.” 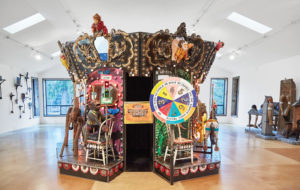 Nancy became Ed’s fifth wife, and ultimately, his artistic partner. Though an accomplished photographer in her own right, she “claimed to have attended the School of Kienholz throughout their partnership,” according to the Los Angeles Times.

Ed purchased property in Hope in 1959 and the Kienholz family — comprised of the couple and their three children from other relationships — moved to Hope full time in 1976. Locals recall Ed playing a Civil War-era bugle when the Clark Fork High School football team, on which Noah played, scored. Noah, who said his father was a classically trained French horn player, remembers the bugle in another context.

“When we were kids here in the summer on the [Hope] Peninsula, when it was time to eat he’d blow the bugle,” Noah said. “He’d blow it once and you had five minutes to get there. If he blew it twice, you better show up winded. If he had to blow it a third time, he’d play ‘Taps.’”

After Ed died, Nancy continued her own artistic endeavors in collage, sculpture and holographics. She also kept very busy restoring older installments of Ed’s to be shown in galleries across the world. In the fall of  2009, as she prepared “The Hoerengracht (Whores’ Canal)” — a life-size installation of a 1980s Amsterdam brothel district — for a showing at the National Gallery in London, Guardian reporter Kate Connolly visited Nancy in Hope. During the interview, Nancy expressed her annoyance that construction on her art studio was not yet completed.

“They’ve gone off to hunt elk for two weeks, leaving me with a building site,” she said. As she and her husband’s art drew commentary on the world at large, the world turned as usual in Hope, Idaho.

In 1981, Ed issued an official statement crediting all of his work from 1972 onward in both his and Nancy’s names.

Colin Wiggins, a retired curator at the National Gallery in London, told the Los Angeles Times what he saw as the difference between the work Ed completed alone and the work he did with Nancy by his side.

“Ed’s work as a solo artist is grotesque, angry and macho,” Wiggins said. “His subjects were often things that angered him. His work yells out its rage to the spectator. This didn’t change when Nancy came along. The rage continued, but now the work gently added another feature that I would define as empathy.”

Like the team they were in life, Ed and Nancy Kienholz remain side-by-side in death — riding in the old Packard.