My first day of work was Mother’s Day 2011. In my navy blue polo and sensible, non-slip shoes, I arrived at Holiday Shores Marina at 6 a.m. and marched through the convenience store aisles to the back: a 12-table breakfast cafe with a view of Ellisport Bay that has since closed. 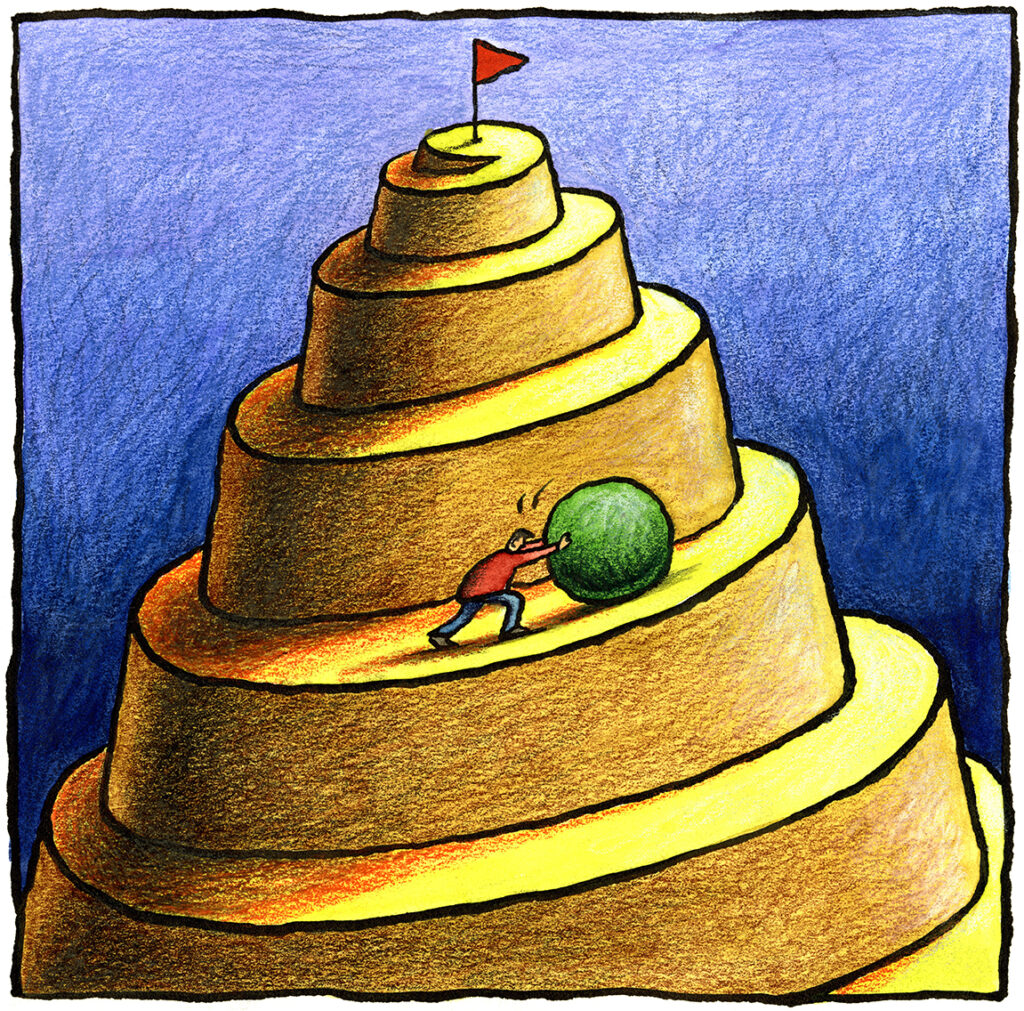 After a crash course in how to brew the coffee, prep tables and write a simple order on my brand new notepad, the manager let me loose on a four-top of middle-aged women. Never in my 15 years of life had I been so scared. By 2 p.m., I didn’t want to stop.

Early mornings, light conversation and heavy breakfast plates seemed a perfect match for my spunky, perfectionist soul. We totaled our orders manually with a greasy calculator, washed the dishes ourselves and shoved our tips into Folgers cans under the counter. No day was the same, and yet I found a familiar rhythm that coaxed me out of bed even on fishing derby days, when I’d seat my first table before the sun came up.

I met so many wonderful people. Even now, nearly a decade later, I see my regulars from those four summers and we hug like old friends. They treated me with dignity and shared in my hopes for the future — one couple even gifted me a scrapbook to take to college. I can recite their Sunday order to this day: veggie scramble, huckleberry pancake, eggs benedict and a glass of whole milk.

I also met the kind of people who walked in determined to be unhappy, and who left just the same despite my desperate attempts to lay down charm as thick as syrup. People-pleasing can only go so far in waitressing and in life, and it’s a lesson I’m glad I learned early.

As much as I learned about those I served, I learned more about how to be a good co-worker. I learned that some people will let you down. I learned that even a middle-aged line cook will need some consoling on a hard day. I learned what it felt like when someone has your back unconditionally.

I’ve since waited tables elsewhere, and was even able to secure my dream job after college: to write, for money. But I sometimes miss the feeling of sifting through dollar bills while seated on a barstool after eight hours on my feet, planning what ice cream bars and CDs I’d buy in town with my hard-earned tips.

There are some things I don’t miss from my years at Holiday Shores, though: unempathetic customers, the too-small grill, the five-gallon bucket of ketchup I poured all over myself one afternoon. Still, I’m thankful for all the lessons, and all of the mistake bacon and pancakes that sustained me.

The strange one
By Zach Hagadone

I’ve always been the Strange One in a family of extremely capable people, who for about 100 years or so in Sandpoint have done real things with immediate, tangible benefits. Because of that, it’s always felt a bit shameful being a “writer” — so often shorthand for, “loser who has no real skills.” Only a few weeks shy of 40, I still feel it and it’s a pitfall about which I warn people younger than me when they tell me that they, too, want to be writers someday.

Yet, it’s the life I chose, and not in an abstract way. I can tell you with close-to-accurate iffiness that it happened when I was a teen. After my first “real job,” as a courtesy clerk at Safeway in 1995-ish — during which I counted my days in 15-minute increments — I jumped across Fifth Avenue to run the fryers at Serv-a-Burger. (A memorable experience there being the time I absent-mindedly poured a fryer’s worth of hot grease into a plastic pickle bucket and had to race with it outside before it melted and burst across the kitchen floor.)

I’d initially taken the fryer job because my girlfriend at the time wanted something nice for Christmas. She’d long since dumped me when, one early spring night in 1999 as I drove home to Sagle with the smell of grease on me and listening to an Offspring tape that eventually got stuck in the cassette player, I stopped at the Lignite Road railroad crossing in the dark.

This was before all those houses filled the field and, as the train rumbled by and with the sweet smell of the tall weeds and algal tiredness of Fry Creek in my nose, I had a revelation that turned into an internal promise: “I will never again work in a way that doesn’t include writing.”

Soon after, I marched into the Daily Bee offices and somehow landed a job as evening copy editor/editorial cartoonist.

That was a good job that I returned to a few times during subsequent breaks at home from college. During those times I loved being a “real writer,” with a desk to sit at and a phone and everything.

I’ve held mostly true to my principle since — aside from minor stints as a bartender and a brief period as a bookstore clerk in downtown Boise. Stories from the former aren’t fit for print. At the latter, I used to peddle Twilight to adults who insisted, “It’s for my daughter.” I brown-bagged them as they looked at me with pleading eyes, “Don’t tell anybody about this…”

Luckily, that didn’t last too long before I got hired to report about business — eight months or so before the Great Recession.

Despite everything, my commitment to strangeness seems to have continued more or less unabated over the past 20 years, finally delivering me back to where it all started — in more ways than one — in downtown Sandpoint.

The most satisfying, demoralizing job of my life
By Ben Olson

In the early 2000s, I packed everything in my car, emptied my meager bank account and drove to Los Angeles to try getting work in the film industry. My dream was to write and direct my own films — which I admit is the second most cliché reason to ever move to L.A. The most cliché reason is, of course, moving to Hollywood to become an actor, which I had no interest in.

I found a room to rent in an Addams Family-style house in Eagle Rock, spending most of my nest egg to make sure I had two months of rent covered while looking for work.

As time went by, I entered the brokest era of my life. I ate a single Taco Bell burrito every day for sustenance. I spent weeks bumming around on foot, too broke to fill my gas tank. When I had made the decision to throw in the towel if no work came by the next week, one of the contacts I made called and asked if I wanted to work as a production assistant on a commercial shoot at the Legoland theme park near San Diego.

I used my last $20 to gas up the car, drove down and worked a 16-hour day for only $50, but I had cracked the nut and gotten work in the film industry. Soon after, another job came my way after a recommendation from my first producer, then another and another. Before long, I had moved out of my abominable living quarters to rent a room in a place right off the Sunset Strip. I was still broke, but I was earning paychecks and started traveling all over the country on a variety of interesting shoots.

During this time, I worked as a freelance production assistant, which is like a glorified gofer on film sets. As a P.A. you were the absolute lowest on the totem pole — first on set and last to leave. Every dirty, sweaty, difficult task was relegated to P.A.’s, and there was no maximum amount of hours you could work before getting overtime (there wasn’t a union for production people at that time). One of my producers was famous for saying, “We pay you by the day, so if I want to work you 24 hours, I’ll work you 24 hours.”

Each job was different and most required long hours of work for little pay. Average days lasted 14-16 hours, and tough days sometimes went 20-22 hours in a row. One short film I agreed to do for free in exchange for networking other jobs ended up being a 36-hour fiasco ending with me wedging the box truck containing all the camera equipment under a gas station awning. I was so worn out and bleary-eyed, the only effort I could muster was to call the producer and tell her where to pick up the “damn truck.” Needless to say, I never worked for that company again.

Another job required me to clean an acre of goose poop from a park before shooting began – by hand. Yet another shoot in the park where they filmed the opening scene of The Andy Griffith Show, I had to carry 100 fake rocks that weighed about 60 pounds each and were as big as a Volkswagen.

While shooting in the Caribbean for three weeks, I had to carry beams for the motion control camera up 14 decks of a cruise ship. The beams weighed upwards of 1,000 pounds and took an army of sweaty P.A.’s like me to get it done – all for a one-second shot that appeared in the commercial.

Looking back on those five years I spent in L.A., I can say without a doubt that I worked harder and longer than any other time in my life. While it was demoralizing to accept abuse from everyone on set, my experience in the film industry remains a fond memory to this day – probably because I got out before going completely insane.