Eyes all across the Inland Northwest—and the world—were fixed on Sandpoint last week for the first public debut of Solar Roadways.

Slowed by a number of unexpected setbacks, Solar Roadways officials finished installing the demonstration in Jeff Jones Town Square early Sunday morning. It was a quiet crossing of the finish line after the high publicity unveiling events Friday and Saturday. According to Sandpoint Mayor Shelby Rognstad, it was a long road to make Sandpoint the first Solar Roadways city, but city and business officials are excited the project is mostly complete. 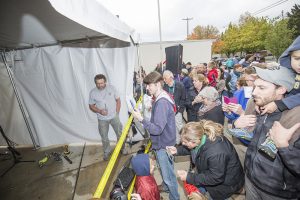 Scott Brusaw, left, unveils the first ever Solar Roadways public demonstration to a crowd of dozens. Photo by Cameron Barnes.

“It really took a team to make this thing a reality,” he said.

Originally gunning for a complete unveiling Friday afternoon, Solar Roadways team members ran into problems with their laminating machine, which fuses protective elements with the sensitive electronics that generate solar energy and power the LEDs and heating elements. Consequently, city officials postponed the unveiling to Saturday afternoon. Once again, insufficient sand used to level the panels meant that only three were installed by the time a second crowd gathered. The third time was the charm, however, and while several panels aren’t functional because of the laminating machine, Solar Roadways co-owner Scott Brusaw said they’ll be replaced with working technology as soon as it’s produced.

“It was really upsetting to not make the deadline,” co-owner Julie Brusaw said at a Friday press conference. “We were worried about how all the fans that support us would react … but people were so kind.”

The Brusaws also aim to replace the demonstration panels, currently the SR3 model, with new and improved products as they’re developed. Their intention is to ensure Sandpoint, as the Solar Roadways hometown, always showcases the latest and greatest examples of the technology.

Television news and other out-of-town media traveled to Sandpoint for the installation, attending a press conference and capturing the public excitement. It wasn’t long before national publications like Engadget had picked up the story.

For those watching from afar, the city installed a live-streaming webcam, which will eventually display information like energy generation in real time. Quick check-ups on the stream more often than not show groups of people lingering around the demonstration or testing them out. View the stream for yourself at www.cityofsandpoint.com/visiting-sandpoint/solar-roadways. 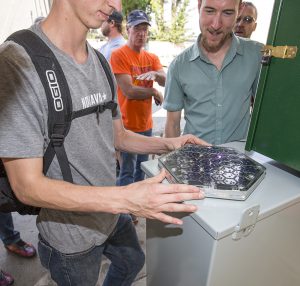 While some residents believe the city’s support for Solar Roadways is inappropriate, Rognstad said the partnership will benefit Sandpoint in both the short and long terms. There are the immediate boons like the increased publicity and tourism the demonstration brings to town—and indeed, many folks traveled to Sandpoint for the unveiling ceremonies alone. Then there is the hope that the company will flourish and grow, bringing new living wage jobs into the community.

“It would be tragic to see an innovative company like Solar Roadways up and leave to someplace like New York,” Rognstad said.

This is the first major milestone in public testing for Solar Roadways, which roared to viral fame several years ago with a crowdfunding campaign that captured the world’s attention. Similar projects, designed to test the panels as walking and biking surfaces and power generators, are planned for Baltimore, Md., and along Route 66 in Missouri.

According to the Brusaws, extensive testing of Solar Roadways panels as driving surfaces begins next year. Traction tests have already confirmed the panels provide braking speeds comparable to asphalt, Brusaw said. Next come punishing stress simulations, which will put 15 years worth of heavy truck abuse on the panels in three months—an important factor in determining durability and cost-effectiveness.

Panel durability is key to the Brusaws’ ultimate goal, which is to make Solar Roadways a viable replacement for concrete and asphalt. They envision a design where malfunctioning panels can be replaced quickly and easily, rather than subjecting entire stretches of road to intensive repair. Alongside ease of maintenance are other benefits like programmable lights for messages or traffic lines, heating elements to remove snow and ice, discrete utility line storage and, of course, solar power generation. The Brusaws estimate that a complete national road system of Solar Roadways panels would satisfy America’s energy needs three times over.

“If we’re going to have real impact on climate change, which we believe is real and human-caused, we need this out in every country in all kinds of applications,” said Julie Brusaw.