A novel that gives face to the landscape

A short and sweet interview with Emily Ruskovich, author of “Idaho”

From Nov. 5-8, Everybody Reads will be hosting ten separate open discussions on “Idaho,” the debut novel of Emily Ruskovich, which became a bestseller after its release last year.

Filled with beautiful prose and haunting passages that weave their way through caring, killing and other unspeakable acts, the story is set in an all too familiar, untamable place. 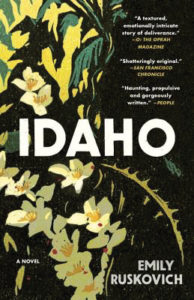 Ruskovich grew up nearby, on Hoodoo Mountain, the biggest rock between Schweitzer and Mt. Spokane.

On a topographic map, Hoodoo Mountain looks an awful lot like a brain — sitting 25 miles west-southwest of dear old Sandpoint, standing 5,119 feet at the peak, to scale.

As it happens, I have spent a solid chunk of my life on that rock, as well. My family has owned property there since my grandmother, who farmed Christmas trees there, in the seventies. She used to plant her trees in cracks in the granite. Her crowning achievement was saving the white pine, Idaho’s state tree. While breeding it, she had developed a blister-rust-resistant strain.

My father’s mother made the mountain work for her, made herself a success story, retired.

Ever since I was a kid, however, I had also heard stories of the other variety — stories of how the mountain (and the valley of the same name) was somehow cursed. It was said the natives had avoided the area for various reasons: clayey soil that turned to talcum powder in the summer and caused tuberculosis, equestrian diseases from nutrient deficient hay, ambushes in reeds along Hoodoo Creek, a plethora of freak accidents, random individuals choosing the mountain as the place to end it all, experienced hunters losing their sense of direction and getting lost walking upslope when they had been sure they were hiking down and other things of that nature, along with lots of bankruptcy and half-built, abandoned homes.

What is known about the mountain is by word of mouth. The Hoodoo Valley has been documented a decent amount, but the mountain, which is mostly owned by John Hancock Life Insurance Co., has not.

There are plenty of first-, second-, and third-hand accounts, but knocking on doors and asking questions in these parts wouldn’t be the smartest. The history has to come to you, instead, like fishing by sitting cross-legged in the water and waiting for a trout to swim into your lap.

As a mind will, mine always wondered if the stories I heard were folklore or fact — and not only factual, but whether they were isolated incidents or all connected. Is an evil spirit just a metaphor for plain old bad luck, or is bad luck a misinterpretation of an evil spirit? Or was that all superstition, and it was really all about dumb luck and perseverance?

Curious to see what I might find, I did a little research. And though I couldn’t confirm or debunk any stories I had heard, something new did swim into my lap.

That something was “Idaho.”

I learned the author had not only grown up on Hoodoo, but her novel was set there. I promptly bought the thing, read it right there on the fabled mountain.

Then, more curious than ever, I had the pleasure of exchanging a few words with Ms. Ruskovich. She had recently given birth, so our exchange was short and sweet.

“I am not, by any means, an expert on the history of the Hoodoo,” she said.

I asked her what she thought about the mountain’s possibly being tinged with some kind of magic — like the wonder and fear superabundant during childhood — that fills her book, as well. And I asked what she thought of me calling her work “a piece of local mythology.”

“To me, everything that happens in the book is very, very real, and I am not sure where the feeling of magic comes from, though readers have definitely said that (about it) before,” she said. “I think perhaps because it’s so atmospheric a novel, edged with this strange, inexplicable darkness.”

“Story of my life,” I said. “I couldn’t help but notice that a couple places in your novel were subject to name changes.” By this, I was referring to Hoodoo Mountain being fictionalized to become Mount Iris, the town of Blanchard to Ponderosa, an unspecified Mount Loeil, and a prison named Sage Hill.

“The word hoodoo was too perfect, too dark and mysterious a name,” Ruskovich said. “It means ‘something that brings bad luck,ʼ and I worried that a word with such a meaning would be heavy-handed, especially since it sits between Priest River and Spirit Lake.”

The actual names of the places had struck her as too perfect for a fiction. The truth wouldn’t have been believable, as if these places were already things of myth. Lines blurred further.

“I also wanted to name the landscape after parts of the face,” Ruskovich went on. “Mount Iris, and Mount Loeil (French for eye), to go along with Pend O’reille (ear), and I renamed the Hoodoo Valley, the Nez (nose) Valley.”

The landscape as a face — I mulled this over. How we are born into it, of it. How the shape of the landscape defines us. How we face and reshape the landscape. How much Hoodoo Mountain topographically resembles gray matter…

In previous interviews, Ruskovich has said that she titled the book “Idaho” because she found she could not separate the characters from the land in her mind.

After our exchange, I was drawn to revisit one specific chapter in the book, a chapter dedicated to the meaning of the word “Idaho” and how the so-called Gem State got its name. Long story short, it was made-up, contrived during a miscommunication at an assembly meeting. It was supposedly a Shoshone word. That was a lie. Idaho entered statehood helped by a myth.

If Idaho the state and Idaho the novel are in fact mythical creations, I see this as a good thing, not a bad thing. In Western culture, we have a tendency to view a myth as something that needs busting. In the era of civilization and humanity and fake news calling “fake news!” on fake news, however paradoxically, we can consider ourselves lucky to have genuine storytellers and their stories (aka myth-makers and their myths) to thank for being there with steadier truths.

With “Idaho,” Emily Ruskovich gifts us locals a taste of something that is otherwise left lingering on the tips of our tongues.