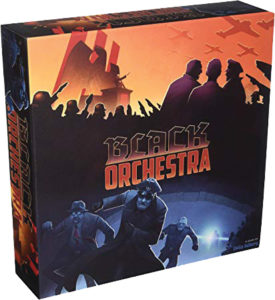 Some critics took exception to the hyper-gory demise of der fuhrer — in large part because it turned the notion of assassinating Hitler into an over-the-top laugh line. Others pushed back against the very idea of writing a fictitious ending to the Third Reich, suggesting its Dirty Dozen-style hit job erased the frequently unsung, selflessly gallant efforts of countless real-life resistance fighters.

Audiences felt differently — the vast majority rejoicing in the ignominious demise of one of history’s preeminent monsters. No less than Der Spiegel reviewer Georg Seeslen wondered aloud why no previous director had killed Hitler on the big screen before.

True: It’s really satisfying to see the entire Nazi edifice explode in a blaze of gunfire and flames, but rather than rewatch Inglourious Basterds for your dead-dictator fix, try killing Hitler yourself in the devilishly clever board game “Black Orchestra.”

Taking its name from the moniker Schwarze Kapelle — the pejorative nom de guerre given by the Gestapo to the historical network of German military officers, civilians and intelligence operatives who tried to off Adolf — the game drops one to five players into 1936 Europe, armed with their wits, sense of timing and cooperative skills to end the nightmare of Nazi rule in one fell swoop.

Beyond the premise, it’s the cooperative aspect of the game that really makes “Black Orchestra” unique (ironically providing the rare ability to play the game solo). Rather than compete with one another to be the “lone gunman,” players must work together to navigate the rush of events — revealed by decks of cards organized into roughly chronological stages encompassing the period from 1936 to 1945. This is accomplished by collecting and deploying useful items from the various geographic locations on the board, as well as drawing plots, special actions and abilities from a deck of “conspirator” cards.

All the while, events send Hitler and his chief henchmen criss-crossing Europe on their own foul business, potentially making or breaking the would-be assassins’ carefully laid plans. Even worse, the Gestapo could swoop in at any time and trundle you off for interrogation, further derailing your efforts or — more acutely — ending the game altogether.

The core strategy is to manage your character’s levels of “motivation” and “suspicion,” which rise and fall based on the event(s) in play. Higher motivation enables certain abilities and plots while higher suspicion makes it harder to execute plots and increases your chances of getting netted in a Gestapo raid.

Making matters even more complex, as Hitler’s military support rises or falls based on events, it becomes correspondingly more difficult or easier to successfully execute your plots. Using luck and guile, players must also do what they can to ensure the dictator’s grip on his fighting forces remains as weak as possible in order to strengthen their chances of a successful assassination. (Examples of plots include train derailment, poisoning, abduction, the historically accurate suitcase bomb and good old fashioned shooting, among others.)

Gameplay is therefore a race against time and circumstances in which you must plan for uncertainty, weigh constant risks of exposure, and maintain the flexibility to strike when and where you’re able.

“Black Orchestra” is clearly designed with hard-core history buffs in mind — evidenced by its subject and adherence to historically accurate characters and events — but it’s equally attractive to players who relish strategy, puzzle and cooperative gaming. Beyond that, Starling Games, which released it in 2018, has created a simply good looking game — filled with thoughtful aesthetics that bring together vintage war movies, tactical maps, spycraft and the starkly elegant look of early-20th century Art Deco.

Perhaps most important — and most satisfying — is the feeling of successfully beating the odds and putting Hitler six feet under. We promise, it’s a lot harder than even Tarantino makes it look.