The Joker and Judy

Trauma and stardom collide in these Oscar-nominated films

Aside from the tribalism of professional sports and the bloodsport of political shitposting on Facebook, the gleeful deconstruction of celebrity ranks among 21st-century Americans’ preferred pastimes. Two films released in 2019 tackle the latter, approaching celebrity from widely divergent starting points but ultimately arriving in strangely similar places: how recognition, either striven for or attained, can ravage a person. 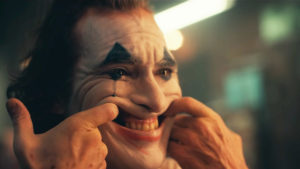 Both screening Thursday, Feb. 6; Saturday, Feb. 8; and Sunday, Feb. 9 at the Panida Theater, Joker, starring Joaquin Phoenix, and Judy, featuring Renee Zellweger, present the fanatic drive for celebrity from below and its tragic descent from on high.

In Joker, for which Phoenix won a Best Actor award at the 73rd BAFTAs and stands poised to nab an Oscar on Sunday, Feb. 9, the titular insane clown gets a decidedly un-canon origin story from the iconic DC comic villain and Batman archnemesis. Batman doesn’t even feature in the movie, though it is set on the mean streets of an ambiguously dated Gotham City.

Navigating the urban hellscape is Arthur Fleck, a street clown whose trauma-born social dysfunction is matched only by an all-consuming desire to make it as a stand-up comedian. Beneath his winsome yet obsessive desire to make people laugh is a soul so flayed by abuse and cruelty that it writhes in agony monstrous enough to seep, then burst pell mell, through Fleck’s grease-paint and onto the society that dealt him so dirty.

The burden of psycho-social and physical torment twists Fleck-the-desperate-entertainer into the Joker — with all the maniacal mayhem that moniker implies — earning him a cultish following of violent copycats in a civil upheaval.

Critics weren’t so sure about what they saw on the screen, and a good many turned in revulsion from the repulsive deeds both performed by and on the “protagonist,” if he can be called such. While roundly praising Phoenix’s clearly punishing commitment to the grotesque role, more than a few culture commentators wondered aloud whether we should really be rooting for this guy. The message being sent by a traumatized misfit wreaking vengeance on an uncaring universe seemed for some to be dangerously — irresponsibly — close to validating the persecution complexes that fuel so many real-life perpetrators of mass violence.

Audiences, however, took a much more enthusiastic view of the film. While ebert.com gave  Joker two stars, ripping the film as simultaneously “chicken-livered” and “genuinely ugly and disgusting” (adding that its social commentary is “pernicious garbage”), viewers gave it an 88% on rottentomatoes.com. Reactions were even more polarized on notoriously picky review site metacritic.com, with critics coming down on Joker with a measly 59 out of 100 and audiences raving with a rating of 9.1 out of 10 — a “must see.” What’s more, this supposed “pernicious garbage” is nominated for 11 Academy Awards, including Best Picture and Best Director for Todd Phillips.

So what gives? Is it really that brilliant? Is it a love for anti-heroes? Genuine sympathy for and identification with the downtrodden, whose gifts and dreams of stardom are crushed beneath the wheels of a broken society? Or, to riff off another iteration of the Joker, maybe some people just want to watch the world burn — and get famous doing it. 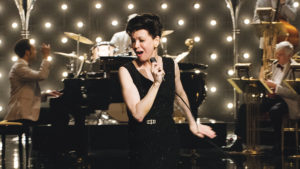 In Judy we get a much more straightforward treatment of celebrity, though coming from the top down as Judy Garland struggles for redemption and relevance — even for her life — in the waning days before her death at 47 from an accidental overdose of barbiturates.

Garland has long stood as a symbol of the damage done specifically to child stars, implicating the Hollywood system in a now-familiar story of sexual, financial and psychological exploitation. In Judy, we enter the tale in its final act as the former superstar has been laid low by decades of harm both at the hands of others and her own.

As with Joker, here we have a performer broken to her core by decades of mistreatment by virtually everyone she’s ever come across. Poverty-stricken and in ill health, Zellweger’s Garland is still out there on stage belting it out in the hopes that it’ll all mean something.

Unlike Joker, response to the film has been more measured — and balanced. Rotten Tomatoes gives scores of 82% and 85% while Metacritic sits at 66 out of 100 and 6.8 out of 10 for critics and audiences, respectively. Ebert.com, in keeping with its apparent sourpussing of late, booed the biopic with a two-star rating and trashed Zellweger’s performance as an “imitation,” the cinematography as occasionally “artless,” and the whole production as “contrived” and lacking vital “humanism.”

Never mind all that: Zellweger will be up there with Phoenix as a nominee for Best Actress at the Oscars. Maybe — just maybe — audiences know best and the star-crossed stars of the 92nd Academy awards will be the Joker and Judy.