Florida band JJ Grey & Mofro are not new to the funky soul-rock scene, and they’re certainly not new to Sandpoint, having opened at the Festival and played the Hive in past years. Grey said he and the band are stoked to come back. 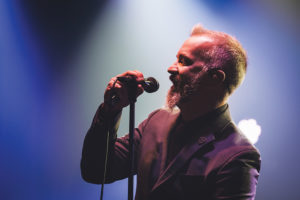 “You can look at a map (of the Inland Northwest) a million times and sure, you know where Spokane is, but then you tour and you find little gems like Sandpoint,” he said.

Grey and his band are jamming in Sandpoint again on Tuesday, July 17, coming back to the Hive for the second year in a row.

Their newest release, “Ol’ Glory,” dropped in 2015. Grey said he has a catalog of about 50 new songs and song ideas that may or may not appear on their upcoming album. Right now, they’re whittling it down and recording the new stuff here and there.

Is it the time since the last record that’s created this plethora of material, or some new inspiration? Grey said it’s a little of both.

“The material just comes to you,” he said. “All I can do is pray that I can remember, or get it down as fast as I can somehow.”

But even as a veteran of the studio — Grey’s current project is his eighth album — he said he’s never felt as comfortable recording as he does on stage.

“Shows are second nature,” he said.

According to a review of the band’s 2016 Red Rocks performance from The Denver Post, “Grey leaves his impact on every aspect of the show.” A Grey & Mofro performance is “a treat for his longtime fans, but also for new listeners.”

Grey told the Reader the key to putting on a good show isn’t about how well he and his band play. Grey said it’s about sharing a genuine connection with the audience.

“I want to share an honest moment,” he said. “Just enjoy it, be there and be in it and be nowhere else. That’s my sole intent at a show.”

Grey said letting go of expectation has been a big theme for him not only as a musician, but in every aspect of his life.

“(Expectations don’t) matter, because when you share an honest moment, the music plays itself,” he said. “When I see people smiling, I lose my sense of time and place. I want that feeling to carry on into everything else I do.”

So what should you expect at the Hive on July 17? There’s sure to be plenty of gritty blues guitar and groovy brass melodies, but Grey will say it again and again — shed the expectations and get ready to share an honest moment with an artist and band who have made a name for themselves doing just that.

“We — us, the band and the crowd — we’re gonna play this thing together and see where it goes,” he said. “We will hopefully laugh some, maybe well up a little bit — I know sometimes I do — and we’ll dance some, too.”

Tickets to JJ Grey & Mofro’s July 17 Hive show are $33 in advance and $40 at the door. Find advance tickets at Eichardt’s Pub, Pucci’s Pub or www.livefromthehive.com. Doors open at 7 p.m.and the show begins at 8. Must be 21 to attend.