Bringing sustainability to the slopes

Nearly two decades ago, David Rogers began designing and building bamboo fly rods. Though his interest in fly fishing played a part in the venture, Rogers said he was more enamored with the process than anything. 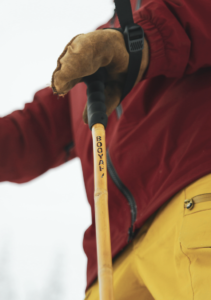 “It’s a cross between craftsmanship and art,” he said, “and there’s a lot of science in there, as well.”

That passion became Headwaters Bamboo Fly Rods, a company Rogers oversees while outsourcing the manufacturing to China. With spring and summertime product lines, Rogers decided he’d pursue a product to cover the other seasons. As a result, Booyah! bamboo ski poles were born.

Rogers started out making ski poles from the same bamboo from which he made the fly rods: Tonkin bamboo. After being approached by an Indian bamboo farmer specializing in Calcutta bamboo, Rogers recently made the shift. While Tonkin is known for its fibrous and hollow structure, Calcutta bamboo features more solid segments, resulting in a stronger, more flexible ski pole.

When Tonkin bamboo is used to make fly rods, Rogers said it is split and restructured into a hexagonal rod. When using Calcutta bamboo to build ski poles, stalks are kept in their natural state and only shortened to fit length specifications.

The Calcutta bamboo supplier with whom Rogers partners harvests the crop once a year, drying and straightening the stalks with heat before sending them stateside. The crops regenerate in two years, making a strong case for the sustainability of Booyah! poles over traditional aluminum ski poles.

“The renewability of the product is pretty exciting for us,” Rogers said.

Unlike his fly rods, Rogers builds the Booyah! ski poles himself in Sandpoint. Currently, he said he is looking to replace the less sustainable elements of the poles — like the nylon straps and rubberized cork grips — with materials like hemp, pure cork and bioplastics.

Rogers said he and his family moved to the area seven years ago following a business partner in a totally separate project, but he said they have since parted ways. He is now dedicating himself entirely to his bamboo business ventures in both fly rods and ski poles.

“You have so much in this area, with the lake and the mountains,” he said. “It’s a good place to be.”

Learn more about Booyah! Bamboo ski poles at booyah.ski or on Facebook at facebook.com/booyahbamboo.