Whether you’re planning to celebrate all the great things the past decade brought you or toast leaving it behind, Sandpoint has a New Year’s Eve shindig for you. 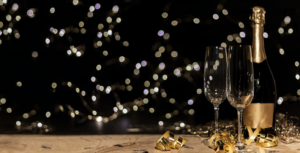 Invested in celebrating the new year aside from the whole staying-up-all-night part? Matchwood Brewing Company has you covered, as the brewery live streams the ball drop in Times Square at 9 p.m. PST. There will be flights of bubbles — which include three specialty three-ounce pours with tasting notes — as well as a non-alcoholic mocktail bar, a New York-style food special and an outdoor fire with s’mores. This is a free, family friendly event.

Jazz, funk and psychedelic soul band Collectivity brings the jams to the Hive’s NYE bash, complete with confetti cannons and a balloon drop. Proceeds from the party will benefit Angels Over Sandpoint. Tickets available in advance for $25 online at beeswaxsystems.com/thehive or at the door for $30. 21+.

Sandpoint’s classic outlaw rock band takes the stage for the final time this decade as the Niner welcomes 2020 with a bang. There’s no cover for this show, and Shilla Korean BBQ food truck will provide the late night eats.

Roaring in the ‘20s Party @ The Pearl Theater in Bonners Ferry
6 p.m.

The Longshot will host a dance party and “power hour” themed treasure hunt leading up to the ball drop, all the while offering drink specials into the wee hours of the morning.

Schweitzer Mountain Resort is also hosting a number of New Year’s Eve parties, but the tickets are sold out. However, as the event organizers point out, “don’t panic.” Chimney Rock is still accepting reservations, Gourmandie is open until 7 p.m. — “but likely a little later” — and Pucci’s Pub and the Powder Hound will be admitting revelers into the evening. Get more info at schweitzer.com/event/new-years-eve-parties.