Do you wanna build a sequel?

I went to see the first Frozen movie with my three sisters in 2013 as a senior in high school. My baby sister was 11 years old at the time; and, while we’d have liked to say we went to the theater mostly for her, it wasn’t true. By the end, we were all invested in the lives of Anna and Elsa, singing the soundtrack all the way home. 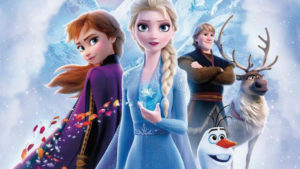 When Frozen II hit the big screen a few weeks ago, all four of us went together again — this time, the youngest of us in her final year of high school. We all laughed and even cried, and listened to the new soundtrack on the drive home. Still, there’s no denying that Frozen and Frozen II are far from the same movie.

The original Frozen story has persisted with such strength in popular culture that my 4-year-old niece — born two years after the original film’s release — will likely tell you that it is her favorite movie.

While the first film received almost unanimous raves from parents, some are changing their tune following release of the sequel over Thanksgiving weekend.

Frozen II wasn’t about to shy away from hard topics. In short, there’s a conflict between the kingdom and the native Northuldra tribe, the viewer ultimately learns that white men started it and now everyone is cursed, and the only way to break the curse is to break down a dam. That’s right: Frozen II goes full-on Monkey Wrench Gang while also commenting on how white people write history. If this doesn’t sound like a kids movie, no worries — those themes are well disguised as fairytale tropes. But, once I had a chance to ruminate on the whole thing… yeesh.

It’s easy to argue that Frozen II is trying to do too much, which I can understand. But I have to say I respect the writers for bringing these issues before children. All at once and amid another plot line where Elsa basically becomes the Avatar? I’m not so sure.

Main characters Elsa, Anna, Kristoff, Olaf and Sven stay generally true to the personalities established in the original film. There were definitely moments during the sequel in which I wanted to strangle both Anna and Kristoff for being uncharacteristically dumb to further the plot, but that might just be the result of my not being a small child who doesn’t notice those kinds of things.

The movie’s comedic strength remains in the little stick hands of Olaf, the oddly shaped snowman who is easily three times funnier in Frozen II than in the first movie. There’s a scene where Olaf does a very animated one-minute theatrical recap of the first movie, which resulted in me and several other moviegoers laughing until we cried.

I’ve seen some critics really laying into the tunes from Frozen II, but honestly, I enjoyed the movie’s core tracks. “Into the Unknown” is no “Let It Go,” but it’s a good song nonetheless. “The Next Right Thing,” which Anna sings after believing her sister has died, is strikingly powerful. It addresses how to continue on after experiencing loss, and will hopefully reach the kids who need to hear it most.

Celebrity covers of the movie’s core songs also do not disappoint — particularly the Panic! At The Disco version of “Into the Unknown.” Lead singer Brenden Urie was born to sing this song. Trust me on this.

As a whole movie, Frozen II was a generally satisfying journey with beloved characters and edgy political undertones. Now, after truly considering the film’s various elements, I won’t lie — Frozen II was a bit disjointed and try-hard. Is it the sophomore slump that so many sequels suffer? Absolutely not. But will 4-year-olds in 2025 be watching Frozen II? I doubt it.