With the speed of today’s news cycle, our recent government shutdown — the longest in United States history — already seems like a distant memory. And now that the specter of the shutdown’s sequel no longer hangs over us (thanks to the passage of the national budget), we have collectively moved on to other worries and distractions. 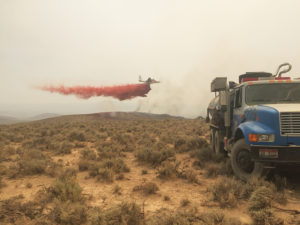 However, my husband and I still feel the sting of the shutdown. It is no distant memory or once-upon-a-time headline. The shutdown may be with us for a long time to come.

We are area business owners and federal contractors. One facet of our business is wildland firefighting. Thanks to the shutdown and the backlog of work it generated, the Forest Service is woefully behind in preparing for the coming fire season. Thus, we are in the dark regarding what will be required of us and when.

We are now into our seventh year sending our tactical water tender — affectionately named Swamp Donkey — to fires across the West. Last summer, the truck was in Nevada for 49 days, attacking small fires before they became the stuff of nightly news clips. Tyler and Jeremiah — my husband and our employee, respectively — protected small communities and vast ranches. Their work was heroic and unheralded, days of boredom punctuated by adrenaline-fueled nights. Their efforts were both the everyday and the extraordinary. Such is the world of wildland fire.

My first roll with Swamp Donkey was the Black Forest Fire in Colorado in 2013. The blaze raged through a wooded community near Colorado Springs, leveling 509 homes and making it the most destructive fire in state history. It was a devastating scene, entire neighborhoods reduced to ash, families utterly adrift with no anchor in this world. It was a shocking introduction to the world of fire.

In my youth, forest fires were something that might cloud the valley skies with smoke, but they largely flashed across distant ridges and smoldered in isolated gullies. They were an annoyance, not a danger. But Black Forest seemed a sign of the changing times. In this hotter and drier west, filling to overflowing with new developments out distant roads, wildland firefighting resources are increasingly tasked with structure protection. California’s Camp Fire last fall was the most recent example of the merging of wildland and urban environments — and the danger inherent in that merging. If a fire of that magnitude broke out near Sandpoint, we’d likely suffer a similar fate.

All of this is to say that wildland firefighting is more essential than ever. There is more at stake now than ever. Fires today hit very close to home.

The 35-day government shutdown dealt a significant blow to the vast network of wildland fire responders. The spending gap crippled the feds’ ability to prepare for the coming season’s conflagrations. The quiet winter months are a time for agencies to learn from the previous fire season and plan for the next. They train personnel, ignite prescribed burns, assess regional fire potential and renew contracts with businesses like ours.

The shutdown meant that much of this preparatory work did not happen. And with the Southwest’s fire season potentially beginning in a matter of weeks, the window for this foundational and essential work is closing fast.

In big-picture terms, this means communities and forests like ours are exposed to greater risk in the coming fire season. We are simply less prepared. In micro-level terms — terms relating to my family and my business — contractors like us are in limbo. What is the status of our contract? What will the government’s requirements be? How many employees will we need? What level of insurance? And if the government shuts down again when the budget expires Sept. 30, can we expect to be paid? The current budget did not include provisions for compensating contractors for lost wages during the last shutdown.

The crux of the issue for us is that our three-year contract is due to be renewed this year. The renewal period is an opportunity for us to expand our business by adding more trucks to our vehicle roster. Last fall, before the border-wall battle truly ignited, we gritted our teeth and took the plunge into the unpredictable world of business expansion. We bought a new water tender. Winter finds us investing a preposterous amount of time and money into the new truck to make it fire-ready. It’s a terrifying risk to take.

Such is life as a small-business owner. There is no reward without risk.

Thanks to the duration of the government shutdown, the Forest Service has decided not to renew contracts for the time being, and we may operate this fire season on last year’s contract. That means that our new expensive truck will sit for a year, becoming less new but no less expensive.

I have many grievances with our president, but this is perhaps the one of which I can speak at the greatest length over the greatest number of beers.

In short, I believe that our country faces many boogeymen of vaster magnitude than the “emergency” of impoverished families crossing our southern border. What of the opioid crisis that is taking 130 lives daily? What about our schools, nightclubs and shopping malls becoming bloody battlegrounds? What about climate change, perhaps the biggest boogeyman of all? The thing is, in the face of climate change —and an inhospitable planet — all other crises are moot.

Thanks to our president clinging to his xenophobic conviction (or the conviction of his base) that there is a crisis at the border in need of $8 billion worth of steel slats, we are less prepared for the true issues at hand — like the threat of catastrophic fire, one of the perils of climate change.

It’s not that President Trump is ignorant to the wildland fire problem. He has repeatedly tweeted about forest fires, often lambasting California for its lack of preparedness (and repeatedly spelling “forest” wrong in the process, garnering him the nickname of Forrest Trump). However, his policy decisions and skewed priorities are serving to exacerbate the issue.

I cringe at the thought of another government shutdown. However, before Sept. 30 arrives, there is much else to worry about. Will we earn enough this fire season to cover the costs of the new, unutilized truck? Will we have enough work to keep employees busy? Will our government be prepared for the coming fire season? And what if this year is Sandpoint’s turn to face the blazes?

Our business is but one dust mote in the far-reaching cloud of shutdown fallout. There are many others out there in far more dire situations than ours. But we are affected. We remain affected.

Though futile, I hold hope that the spirit of bipartisanship may replace brinksmanship among our elected leaders. I hope that they learn to reserve emergency measures for true emergency situations. And I hope that our politicians stop using the livelihoods of hardworking people as pawns in zero-sum political frays.

Jen Jackson Quintano writes and runs an arborist and wildland fire business with her husband in Sandpoint.