The Cougar Fire made substantial moves over the weekend, as the blaze jumped Lightning Creek headed northeast and tripled in size. 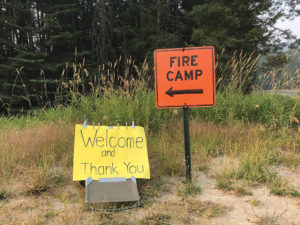 A fire camp sign leading up to Hope Elementary School, accompanied by a sign placed by an anonymous well-wisher welcoming firefighters. Photo by Lyndsie Kiebert.

The fire, located five miles east of Hope, was a reported 3,700 acres on Wednesday afternoon, according to Idaho Panhandle National Forests officials.

Officials on the Cougar Fire initially intended to use Lightning Creek as a fuel break, but windy conditions Friday night into Saturday morning caused the rapid spread of log-to-log burning and group torching. Fire Bosses — small planes that can pick up water — have been utilizing Lake Pend Oreille and dropping on the Wellington Creek ridge to slow northern fire growth.

The west side of the Cougar Fire, facing Hope, is being monitored but not making any substantial moves.

An area closure was implemented Wednesday in response to the Cougar Fire. The closure’s general boundaries are along Forest lands from Scotchman Peak to East Hope, from East Hope to Wellington Creek to Rattle Creek, from Rattle Creek to Lightning Mountain, and from Lightning Mountain to Scotchman Peak, according to InciWeb. Find a map of the closure area under the Cougar Fire incident page.

“Fire-fighting resources are very limited due to fires in the west, and steep rugged terrain is limiting direct suppression,” officials on the Cougar Fire report.

The Alpine Fire, 11 miles northwest of Sandpoint near Caribou Lake, was contained Friday. Around 32 fire personnel continue to work on the fire lines to keep smoldering activity contained.

The Smith Creek Fire, seven miles north of Priest Lake, was over 835 acres as of Tuesday. The slow-moving blaze is not expected to grow substantially, and is contained mostly to timber litter and understory brush, InciWeb reports.

The Copper Mountain Fire, on the Canadian border near Eastport, was reported at 182 acres and 25 percent contained on Wednesday morning. U.S. and Canadian resources are being used to control spotting on this fire. 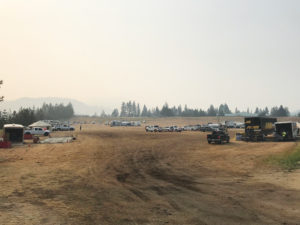 Another fire on the southern end of Lake Pend Oreille is the 1,100-acre Rampike Fire, located near Shoshone Creek. IPNF reported Wednesday that the Rampike Fire has crossed into Montana, so Idaho Panhandle and Kootenai National Forest personnel are currently working on a course of action to fight this fire. Fire managers are also considering aviation support in order to get a better look at the fire’s natural barriers.

IPNF reports a risk for lightning strikes in the Idaho panhandle Thursday, and an increased risk Thursday night into Friday morning.

Air quality has taken a dive due to a combination of local and regional fires. Sandpoint was sitting at 159 Wednesday afternoon — categorized “unhealthy” by the Environmental Protection Agency on airnow.gov. “People with heart or lung disease, older adults, and children should avoid prolonged or heavy exertion. Everyone else should reduce prolonged or heavy exertion,” the site reports.

At 200, the air quality becomes “very unhealthy,” meaning everyone is at risk for serious health issues. Air quality is predicted to remain poor for the next several days.