Most people, especially gardeners, love to have fresh-cut flowers in the house. They bring color, fragrance and a good feeling into the home. But while most flowers aren’t toxic — there are even edible flowers you can put in salads or drinks — a surprising number of flowers are poisonous and can harm small children and cats that nibble on them. (Obviously, they can harm large children and dogs, as well, but dogs usually aren’t up on the tables and large children usually have outgrown that sort of thing. Usually.) 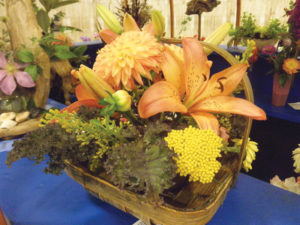 Lovely arrangement; the dahlias are safe for pets and kids; the Asiatic lilies cause kidney failure.

Some flowers, like chrysanthemums, will usually only create a rash on the lips and mouth, while others, like monkshood (aconitum, wolfbane), are deadly poison. Lily of the Valley is so poisonous that even the water in the vase is very, very bad! Below is a list of plants commonly used for cut flowers that are poisonous. Remember, this is NOT a complete list.

Lily of the valley

Plants with an asterisk* are ones I have found on both poison and non-poison lists. Dianthus is frequently considered an edible flower and was used to flavor wine in the Middle Ages because of its clove scent; peony petals are used in tea in the Orient; gladiola flowers are sometimes stuffed and served as hors d’oeuvers. But just because humans can eat them safely doesn’t mean all creatures can; remember that chocolate even in small quantities can kill a cat or dog! I feel it’s better to be safe than sorry if you’ve got cats cruising the table tops where vases are.

While that list doesn’t seem to leave us with many choices for cut flowers, there are still a lot to choose from. Most plants that have a square stem and alternate leaves, like mint plants (many salvias, nepetas and agastaches make good cut flowers), are safe. Most daisy type (asters, rudbeckias, coreopsis, cosmos, echinaceas, Shasta daisy) flowers are safe. Roses are safe (and edible, if not sprayed). Veronicas, lilacs, alchemilla, pansies, phlox, astilbes, hostas, bachelor’s buttons, coral bells, zinnias and sunflowers are just some of the many safe flowers.

And remember, any flower can make a human or pet sick if it’s been sprayed with pesticide or treated with a systemic. Enjoy your flowers, but do so thoughtfully if you have vulnerable members of your household.