If you’ve driven the Long Bridge recently, you may have noticed that Bleeding Hearts Tattoo Emporium has adopted the iconic stretch of road through Idaho’s Adopt A Highway program. 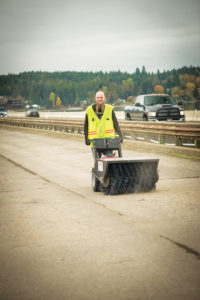 Those blue and white signs represent an effort on the part of Bleeding Hearts — specifically owner Jon Bates and artist Erika Cox — to give back to the area by making sure that well-traveled road and walking path stay clean.

Bates said that while he’d love his family to be more deeply involved with community matters, meetings are often held during work hours.

“It’s hard to support your family and also do those things,” Bates said, adding that the semi-annual cleanup is a great way to give back to the community on more time-friendly terms. “It’s flexible.”

Bleeding Hearts is inviting any and all who want to be involved in the next Long Bridge cleanup to participate on Sunday, May 26. Participants can park at either gas station at the north end of the bridge or at the Long Bridge Bar and Grill on the south end. Work will start at the north end at 9 a.m., and safety vests, snacks and drinks will be provided.

The first cleanup day was in October 2018 and took about seven hours with over 20 helpers, Cox said. With one cleanup under their belts, the Bleeding Hearts crew now knows what kind of equipment will be most helpful in clearing trash and gravel. While they are renting some equipment, Cox said they could still use electric blowers, large brooms, flat shovels and ATVs to haul supplies and buckets of gravel on and off the bridge. Anyone who wants to volunteer such equipment should contact the Bleeding Hearts shop at (208) 597-7607.

At the October cleanup, Bates’ three kids walked more than 10 miles, and Cox said the crew collected around 12 bags of trash. She said it was an amazing experience, and a main inspiration for joining the Adopt a Highway program.

“We want to set a good example for the kids,” Cox said. “We’re setting a standard.”