A short history of religious violence in Sri Lanka

“The sword is pulled from the scabbard, it is
Not put back unless smeared with blood.”
—from a Sri Lankan Buddhist battle song. 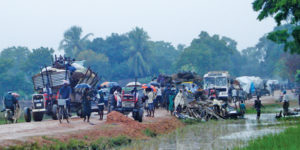 Civilians being displaced as a result of the Sri Lanka Army’s military offensive. Courtesy photo.

Over the past 36 years I’ve traveled to 11 Asian countries to study their religions and philosophies. I wanted to add Sri Lanka to that list, but I always decided that there had been too much violence in the country.

Just when I thought I could book a flight to Colombo, Muslim militants bombed three Christian churches and three hotels on Easter Sunday — killing 250 with over 500 injured. This was the first attack of this sort by Muslims in Sri Lankan history. Muslims and Christians had always had peaceful relations.

In research for my book “The Origins of Religious Violence: An Asian Perspective,” I found that Hindus, Muslims and Christians lived in relative peace until European missionaries arrived to preach the idea of one true religion. The result was that Europeans taught the natives that they could be just as fundamentalist as some Christians are. Religiously motivated violence was the result.

The flag of Sri Lanka contains two stripes, green embracing the Muslims, and orange integrating the Hindus. Buddhist militants have removed these from their flag, a sure sign that, for them, religious minorities are no longer considered rightful citizens. Hindus comprise 13 percent of the population, while Muslims and Christians claim 10 and 7 percent respectively.

For 26 years the Sri Lankan government waged a campaign against the Tamil Tigers, a ruthless terrorist organization whose fighters invented suicide bombing. The Tamils are majority Hindu, but their grievances are primarily linguistic and socio-economic.

Buddhist militants, however, made it into a religious war, and their monks led government troops into battle. In the end over 50,000 soldiers were dead and more than 100,000 civilians lost their lives.

Since the end of hostilities in 2009, Buddhist mobs, led by extremist monks, have killed Muslims and Christians and burned mosques, churches, homes and businesses. Between 2004 and 2014 there were 320 cases of arson against churches and Christian homes, the burning of Bibles and physical assaults on Christians.

In 2011, Buddhist monks destroyed a 300-year-old Muslim shrine, and in June 2014, Muslims homes and businesses were burned by Buddhist extremists. Four people were killed and 80 were wounded over a two-day period of rioting.

Bodu Bala Sena (Buddhist Power Force), ironically claiming to be non-violent, took responsibility, but the government did not respond with sanctions of any sort. This group has also been behind anti-Christian attacks as well.

In early 2018, Buddhist militants were at it again, attacking mosques and burnings homes and businesses. Two Muslims were killed and 15 injured, and police officers were accused of aiding the militants. In addition, supporters of former President Mahinda Rajapaksa’s political party were found among the rioters.

It was only a matter of time for some Muslims to respond. Hashim Zaharan, the leader of the nine bombers, was well known to authorities, and he had been arrested (but then released) for defacing Buddhist statues. He threatened a group of liberal Muslims with a sword for not being true believers. He preached hate on the internet and openly supported ISIS.

Zaharan had been ejected from a Muslim school where strict Islam was being taught. He then established his own mosque, which did not have any certification from Islamic authorities. Local Muslims and other citizens alerted police about his activities, and they expressed concern about further violence that he might incite.

Two of the jihadists did not fit the typical profile of Muslim suicide bombers. They were well educated sons of a prosperous spice trader, rather than vulnerable young people or seasoned criminals such as the Belgian and French bombers.

The more worldly elder son (age 35) was being groomed to take over the business, but the younger son (age 31) was much more devout and more likely be radicalized by Buddhist attacks on his fellow Muslims.

When police came to the younger son’s home after the bombings, his wife blew herself up along their three children. The father, who claimed to know nothing of his sons’ views, was arrested, and his close associates fear that he will be tortured and give a false confession.

Zaharan had contacts in neighboring Tamil Nadu, and Indian security officials warned the Sri Lankan government that its churches had been targeted. Even Sri Lankan intelligence officials had a list of these jihadists. Tragically, no preemptive measures were taken, and political conflicts within the government may have been the reason why warnings did not get to the right people.