Two Music Conservatory of Sandpoint students will play a Mother’s Day Tea Time piano concert on Sunday, May 11, at 1 p.m. at the Heartwood Center. 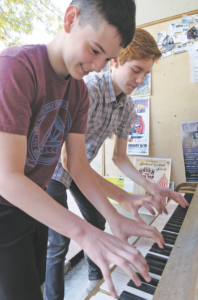 Levi Hill, left, and Cody Moore, right, play a duet on the public piano in front of the Music Conservatory of Sandpoint. Photo by Ben Olson.

Levi Hill, 13, and Cody Moore, 14, will each play a selection of classical piano songs. Mothers are encouraged to attend with their children.

Hill has been playing piano for over four years. He first began thanks to a chance encounter in a Costco store.

“When I was 5 years old, we were at a Costco and my dad was playing the piano there,” Hill said. “I wanted to try it out because I’d never seen one before. So my dad taught me a simple piece, and I asked if we could get it. He reluctantly agreed.”

Hill said he prefers classical pieces, especially those composed by Chopin or Franz Listz. He will be performing solo pieces by Bach and Chopin, as well as two separate duet pieces with Moore.

Moore plans to play pieces by Felix Mendelssohn and Mozart, as well as duets with Hill.

The concert is not just an effort to honor their mothers, who both credit as major influences and driving factors in their music career. It’s also a fundraiser to cover costs of a renowned camp Hill and Moore will attend this summer.

“We both got accepted to Interlochen, a prestigious art camp in Michigan,” Moore said.

The school’s tuition is $6,000 per student. Moore and Hill have embarked on a fundraising campaign to cover the costs of the camp, which has hosted famous artists such as Josh Grobin and Norah Jones to name a few.

To date, they have chipped about $9,000 away at the $12,000 goal, thanks to a combination of reduced tuition and fundraising events held at local businesses in Sandpoint. Karin Wedemeyer from the Music Conservatory of Sandpoint also helped raise $1,000 for the tuition.

Since this is a concert honoring mothers, each student also gave appreciation to their own moms for the help they have given them on this musical journey.

“My mom has definitely helped me a lot,” said Moore. “I have five siblings. Most of them play piano, and two of them got really good, then they quit. She said to me, ‘You know what? You are not quitting!’ I’m glad too. I’m sure she knew I would grow up a bit and see how much it would benefit me and how much I would love it.”

Hill said his mother has also been integral to his musical development: “My mom has been really supportive of everything,” he said. “It takes a lot of time, taxiing me around all over places. It’s just really good to have that type of support.”

To see Cody Moore and Levi Hill perform, head over to the Heartwood Center Sunday, May 11, at 1 p.m.  To donate to Moore and Hill’s fundraising efforts for attending Interlochen this summer, please send donations to Music Conservatory of Sandpoint and specify they are for Hill and Moore’s tuition.