Grant Farm may be labeled an Americana band, but there’s no doubt this Colorado-based four-piece can adapt to just about any scene.

In Sandpoint, the band has played the Eureka Institute’s SummerFest — band founder Tyler Grant mentioned the band loved the “hippie” scene — and this weekend they’ll play the Heartwood Center in a show put on by Takin’ Time, a local nonprofit which strives to make “quality music and art available to those who typically do not have access to it.” 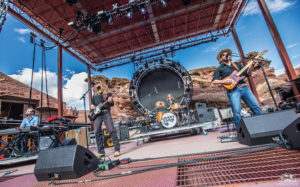 “(The show) is going to be a good cross-pollination of the scenes we’ve been a part of in the area,” he said.

The Takin’ Time show is Saturday, March 31, with doors opening at 6 p.m. and the show at 7. All ages are welcome. Grant Farm is known for high-energy shows filled with Grateful Dead covers, lots of originals, and plenty of dance numbers mixed in, Grant said.

“We’re just looking to give everybody a good time,” he said.

“That is just something we‘ve all been through — trying to make a living like everyone else,” he said. “And so are the people at our shows. That’s a common thread along our travels.”

The ever-growing web of musical storytelling is something Grant Farm wants to be a part of according to Grant. As a result, their original works aim to build on the many characters of American mythos.

“We don’t want to just write about, ‘Oh honey honey, baby baby’ — we want people to connect on a deeper level,” Grant said, mentioning his admiration for Bob Dylan and other songwriters who wrote meaningful songs about real, hardworking people, adding with a laugh, “We aim high.”

Grant Farm dropped a live album this month — “Meeting on the Mountain Live, Vol. 1” — and Grant said if there was ever a time to experience those live vibes in person, it’s now.

Tickets to Saturday’s show are $12 in advance, $15 at the door and children under 12 are free. Find tickets at Eichardt’s, Loaf and Ladle, 7B Grooves or takintime.org.