Editor’s Note: This is the first of a series of profiles of political candidates running for office in Idaho. Starting with the gubernatorial race, we will publish profiles of each candidate leading up to the primary election in May.

Tommy Ahlquist has a hard time talking about himself. 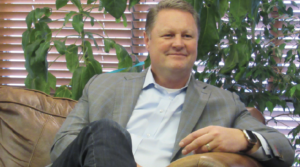 Tommy Ahlquist sits down for an interview with the Reader after speaking with employees of Northwest Specialty Hospital in Post Falls in November, 2017. Courtesy photo.

He isn’t shy, or bad at articulating his thoughts. Ahlquist would just rather talk about the people who influenced his choices to be a doctor, a businessman and now, a Republican gubernatorial candidate.

So why should Ahlquist be the next governor of Idaho? If you asked him, it would be because serving people is all he knows.

“I couldn’t help but learn (to serve). That’s how I grew up,” he said. “It may sound corny, but that’s the way it was. If you want happiness, you’ll find it through serving.”

Ahlquist cites his grandparents as his primary influences. He can recount elaborate memories of discussing God and friendship with his Grandpa Pettersson under willow trees, or delivering banana bread to neighbors with his Grandma Pettersson.

Now, Ahlquist says he sees that spirit of giving across the state.

Ahlquist visited Sandpoint on Nov. 3, 2017, as part of his “44 counties in 44 days” tour. He spoke at the Sandpoint Community Hall to a group of a few dozen locals, outlining what he calls his “conservative blueprint for an even better Idaho.” Small businesses, education, healthcare, tax reform, term limits and ethics are Ahlquist’s primary focuses as he sets his sights on the governor’s office.

“It’s a list of ways we can improve our state, and it starts with re-focusing our priorities,” Ahlquist wrote in a campaign statement this month. Some of those priorities include eliminating regulations on small businesses, streamlining Idaho students to Idaho jobs and reforming tax code to make it more “fair, flat and simple for Idaho families and businesses.”

Ahlquist is Mormon, and served as stake president of the Meridian Idaho North Stake of the LDS Church for a couple of years leading up to his declaration of candidacy. When the Idaho Statesman asked Ahlquist how his beliefs would play into his politics, he said he planned on “running as a businessman and physician, a husband and father.”

“A lot of the best people in my life are of different religions,” he said, noting that most people can find common ground in the belief of a supreme being. “I hate it when people pander and use religion in politics, and I don’t ever want to do that. It’s a delicate balance, because it does play into your life and who you are. I just always try to check myself.”

As a “businessman and physician,” Ahlquist boasts a sizable resume. He spent nearly two decades as an emergency room doctor before transitioning in 2015 to focus exclusively on his growing real estate business. In the last 10 years, he has helped build over 2 million square feet of commercial property across Idaho, and is often credited with transforming downtown Boise, most notably with the Zion Bank Building, Idaho’s tallest building.

He has also dabbled in a number of entrepreneurial projects and served on more than a dozen community boards and committees.

This is Ahlquist’s first bid for office. In response to questions surrounding past donations to Democratic campaigns, Ahlquist said it all comes down to good business.

“I voted Republican my entire life, and the core values I believe in are all free markets and personal accountability: very, very much Republican,” he said during his visit to Sandpoint. “And in all fairness to people, I don’t have a voting record, but what I ask people to do is look at … how I’ve lived my life.”

Having traveled the length and width of Idaho a number of times in the last year, Ahlquist said nothing compares to the stories, concerns and suggestions he’s heard from everyday Idahoans.

“The richness of this experience cannot be put into words,” he said. “The enormity of the task that’s at hand and how people will rely on you as a leader and someone to look out for them and listen to them and fight for them — it’s humbling.”

Learn more about Ahlquist and his platform by visiting tommyforidaho.com.

Tommy Ahlquist at a glance:

GOVERNMENT SERVICE: This is his first run for office

EDUCATION: B.S. Biology and Doctor of Medicine from the University of Utah

FAMILY: He is married to his high-school sweetheart, Shanna. They have four children, two of which are married as of last summer.