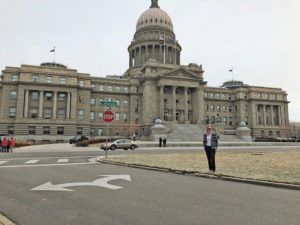 In a recognition of her work as Sandpoint City Council president and director of Lake Pend Oreille Waterkeeper, Shannon Williamson’s peers elected her to a two-year term as a District 1 representative on the AIC Municipal Water Users Group oversight group. A good fit given her professional experience, Williamson and the rest of the oversight group will focus on issues including, but not limited to, water rights, water quality, and stormwater.

Williamson was elected to her second term on the Sandpoint City Council in city elections last year. Council members also unanimously voted for her to continue her role as council president into her second term.

“(Its purpose is to) increase the proficiency and effectiveness of Managers and Administrators of local government within the State of Idaho; to strengthen the quality of local government through professional management; to encourage and support the precepts of the Council/Manager plan; to maintain the high ethical standards of the profession of City/County Management; and provide opportunities to enhance the professional development of its members,” Stapleton wrote in an email.

Stapleton was hired as Sandpoint city administrator in December 2015.