Editor’s Note: These profiles are part of our weekly election coverage leading up to the primaries in May. This interview has been edited for length.

SR: Thanks for taking the time to talk with us, Paulette. To start out, could you tell us a little about your background and how it informs your political ideas?

PJ: One thing I haven’t noticed from the other candidates and makes me stand apart, I think, is the fact that my people all raised me. There’s the saying that a community raises a child, so when I say that Idaho raised me, it’s why I always want to give back and contribute in every way possible. 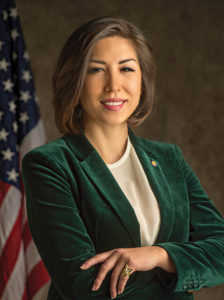 Idaho did really raise me. Because I was raised in the countryside, we cultivated a perspective where … if one of us is hurting, we’re all hurting. And that still applies when you’re successful. The minute I graduated high school, everyone was happy, because they knew I would always come back to make the community a better place. The same goes for our children. We want our children to succeed because … we know they will build upon what we started.

… So I feel very special in that way, because I came from this state and was born and raised in this area. Of course, my land is here, as are the people I grew up with … and when you’re raised by a certain community, and you have these values attached, that really drives your voice across both parties, or any party, really. It goes beyond politics. It goes into the hearts of the people.

… Then there’s this whole perspective of self-reliance and fierce independence which we love. … We’re a subsistence culture: We are connected to the land, we farm the land, we hunt and fish, but there’s also this sense of giving back, too. We take care of it, because we are the ultimate stewards of it.

That’s how I see my voice being different as far as my values go: how I was brought up. It’s what (defines) my identity as a candidate for Idaho governor.

SR: So when you think about those values, how do you apply them when determining your priorities for the state? What do you think are the most pressing issues facing Idaho in the coming years?

PJ: I think that’s what makes me the strongest of the candidates. I and many others are really turned off by politics altogether and how we see people constantly … mudslinging and deceiving the public, deceiving our businesses, deceiving our youth and future generations. (The process has) become more corrupt and less productive for the people at large. People want to see something in terms of growth. They want to see what’s going to happen with their health care, with their job opportunities. Our youth are looking for good schools … and for opportunities to grow and excel.

… As long as we can stay away from the politics and really look at where all the problems are, (we can fix them) on both sides. Rather than staying in our party boxes, people should look at their value system and the more important things. Let’s protect our water and protect our land. Let’s ensure that we’re protecting our air quality. And of course, it’s about … developing our strategy for the future that isn’t based on politics, but on the fact that we want to invest in our future and our youth.

… For me, it’s all about connection to the land. One of the issues I’ve seen is … how we want to exchange our Idaho lands and federal lands when ultimately it’s about stewardship. It’s about ensuring we’re keeping our Good Neighbor Authority agreements intact … so we can broaden out opportunities for logging contracts to properly manage them. That ensures that more jobs are coming in … (and helps) with fire suppression.

That’s what I think will help my candidacy: When people see someone who is tied to the land and who has been in the trenches … ensuring we’re finding solutions for the problems we see. Those problems are always going to be there as long as we’re focused on the politics. … When you don’t have  leadership that’s willing to listen to every single voice in the state, then you lack an opportunity to hear other solutions. For me, in my ability to listen to other voices, I see that as true justice for all. That is true opportunity for every individual.

SR: If you win the Democratic primary election, what kind of campaign strategy do you envision for a state that has voted Republican so consistently for so long?

PJ: Not to give away my entire strategy between you and me — and I say that with a smile. But I honestly think that what has happened in the past with so much voter suppression and challenging the people’s ability to have voice means that the people will fight back. They will rise above it. They will vote for it. … They will stop voting against their interests by voting for one party … because they’ll see it hasn’t done them any good in the long term. Our people are very intelligent, and they will speak independently. They won’t vote for the party, they will vote for the person.

SR: Nationwide, we’ve seen some surprising Democratic victories in traditionally Republican states and districts. Many see that as a backlash against President Donald Trump. Do you think that’s a trend that could spread to Idaho?

PJ: I have a lot of friends who voted for Trump, and I think that’s because they wanted to see something different. I think it’s the same for those states that voted Democrat. There are some who want to see some change, who want to change the leadership at hand. I think it will be the same for Idaho. Perhaps it won’t be on the same note as what we’re seeing with the president, but I think (Idaho voters) see this is a good change. This change will improve our system. This change will improve the lay of the land.

SR: You recently announced that you appointed a long-term substitute to fill your legislative seat so you can focus on your campaign. What led up to that decision, and what was the reaction like?

PJ: The reaction has been excellent from everyone. Well, I should say mixed. There are those who are sad to see me leave the legislative body, … but that is part of the bittersweet feeling I’m talking about. Many understand it’s a good decision and are 100-percent supportive because they want to see me focused on the governorship. … I’m all in for Idaho, and that means 100-percent commitment to the race, because if you’re running for governor, you have to be all in. You have to be focused on every single issue, every single community, every single individual that needs your attention, because they’re trying to make a very thoughtful decision as to who their next governor will be.

SR: Is there anything else you would like to mention that perhaps we didn’t cover?

PJ: I just want to thank the folks in Sandpoint. Every time I visit, which is at least three times now, it’s been an amazing visit. I’ve seen some divisiveness there, but ultimately, I know there are lots of good people on all sides. We can always disagree on issues, but when it comes down to it, we’re part of the same community.

… I know in Sandpoint, they’re dealing with the smelter, they’re dealing with the railroads and coal trains — threats on every single side, including around the lake. My wish is for everyone to focus on the threats that face them in that community and come together on all the right issues. As governor I would make sure to fight those developments that would harm our people, and I think our leadership should stand strong against those issues.