Think Before you Spray

Someone has written with black spray paint on a retaining wall beside the Highway 200 railroad overpass at the west end of Hope, “TRUMP! SAVE AMERICA! DEPORT ILLEGALS!!”

Besides being offensive and ugly, it is also highly ironic. That wall holds up a Chinese cemetery that was begun during the construction of the Northern Pacific Railroad. The stretch of railroad along the north edge of Lake Pend Oreille was built on the backs of immigrant Chinese, many of who were in this country “illegally,” without identification or permission of immigration authorities. They were, however, here at the encouragement of their employers. 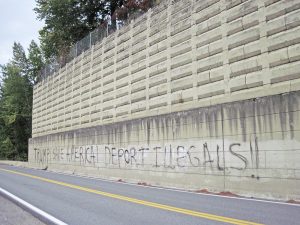 The graffiti in question, sprayed on the retaining wall of the historic Chinese cemetery in Hope. Photo by Sandy Compton.

The Chinese worked hard and worked for less than Irish and Italian immigrants who made up many of the crews of the Northern Pacific and Great Northern as they crossed the Rockies. They spoke a different language and brought their culture with them from across the Pacific. For these reasons and others, they were targets of attempts to deport them all. Some were sent “home.” But, not all. Not near all. At the turn of the 20th century, both Sandpoint and Hope had Chinese colonies.

When I lived in Sandpoint as a high school kid, Lee Eng was our neighbor. He ran successful businesses in Sandpoint and raised a family here. He was, as I remember, a kind and quiet man who was a terrific gardener.

The summer I graduated from high school, I worked with his nephew on the Forest Service, a tall young man who let us know that not all Chinese are short. His family was from northern China, he told us. He was one of the funniest people I ever met.

The Trump supporter who defaced the retaining wall at Hope is not funny, at least not intentionally. Nor did they do much for their cause. Some like-minded folks might cheer them on, but I doubt that they convinced anyone to switch candidates. In fact, the only accomplishment they might have achieved with their can of black spray paint—besides proving themselves somewhat suspect intellectually—was to cause me to write this.

I’m not sure if that’s for the best, but it’s a good chance for me to exercise my brain, which I doubt that the guy—or gal—with the spray paint was doing when they vandalized the retaining wall.

Excuse me, Mr. or Ms. Spray-Painter, but it’s ILLEGAL to deface public property, no matter how good you might think the cause is for which you are committing vandalism. You should be more careful, or you—should Mr. Trump actually get elected, God forbid—might be DEPORTED.

The interesting thing about policies that advocate deporting illegals is defining what an illegal is (“illegal,” by the way, is not yet a noun in the English language, but still an adjective. Just so you know). It is those who do the deportation who will decide who need deporting. With Mr. Trump, it appears that the rules can change at the drop of a hat. The definition of “illegal,” the unauthorized noun, might change just as easily.

First, we deport folks who are here without checking in with immigration, a process, by the way, that could double the national debt. And, then maybe we deport all the other sorts of illegals that can be defined under the fuzzy rules of illegaldom. Folks guilty of vandalism with black spray paint could end up on a railcar bound for some other country. Which in itself is hilarious. What country is actually going to take our huddled masses?

So, Mr. or Ms. Vandalizer. Think before you spray. That’s what I say.