The bells of Corfe

Some places feel tired and are none too happy about it. There’s a restless, frustrated feeling to those places — as if they kick in the night. Corfe in south-central England, in the county of Dorset, is such a place. 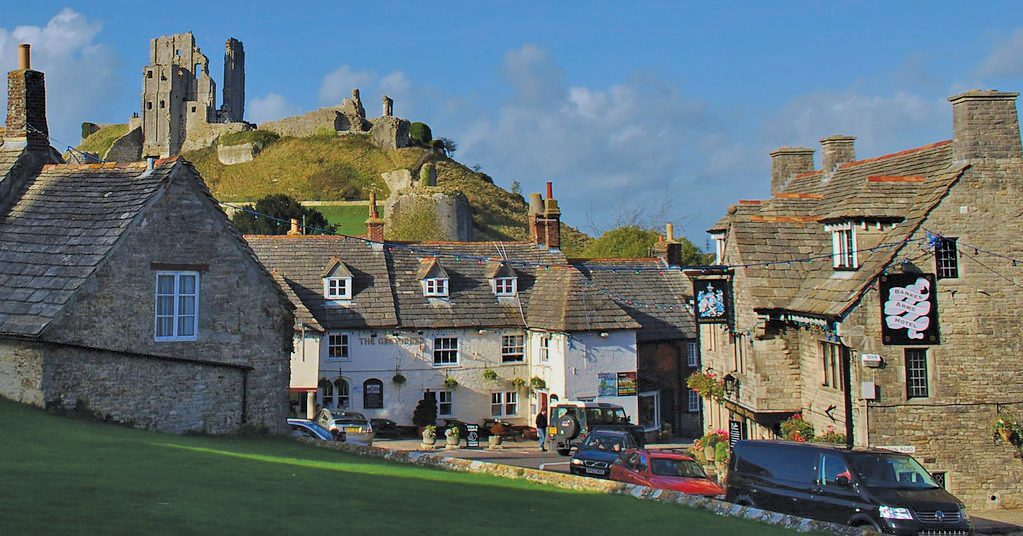 The Corfe Castle looms over Corfe in south-central England in the county of Dorset. The Bankes Arms Hotel the author stayed at is in the foreground at right. Courtesy photo.

Located on a hill in a defile of the Purbeck Hills, which ramble south crisscrossed by ancient Roman roads and barrows to the dramatic chalk cliffs of the Jurassic Coast, is Corfe Castle, a fortress whose works predate even William the Conqueror and was blasted by Roundhead sappers in the 17th-century English Civil War.

Today it juts over the small village — constructed from bone-colored stones salvaged in part from the ruin — like a mouth full of shattered teeth.

The most haunted place I’ve ever visited was not Dachau or Auschwitz. Neither the cave where Socrates committed suicide in Athens nor the slave dungeon in the bowels of the fort at St. Croix in the U.S. Virgin Islands. It was Corfe Castle.

My wife and I visited there on our honeymoon 14 years ago this month and, while it sounds silly, even now I return to it and remember the indistinct terror I felt there on an ill-advised late-night walk below the battlements that I am convinced brought me and my wife and me into contact with displeased spirits from the past.

Begun as an Anglo-Saxon stronghold, Corfe is a site of murder, treachery, torture and warfare. St. Edward the Martyr was assassinated there by his own stepmother in 978 CE.

The eldest though unrecognized son of King Edgar the Peaceful, Edward had been crowned king three years before he visited the royal castle at Corfe and greeted his stepmother Queen Ælfthryth beyond the gates of the castle. As the story goes, Ælfthryth wanted Edward out of the way so her son, Æthelred later called “The Unready,” could ascend to the crown. She served Edward poisoned wine and had him stabbed to death there on the cobbles. Since recognized as a Catholic saint, the St. Edward, King and Martyr parish church at Corfe stands not far from where the unfortunate young king met his end.

About 300 years later, King John — that King John, the villain of Robin Hood myth — let almost two dozen French prisoners starve to death in Corfe’s dungeons, while King Edward II found himself locked up there awaiting his murder. Finally, during the English Civil War in the mid-1600s, the Bankes family — led by Lady Bankes — resisted two sieges by Oliver Cromwell’s Parliamentary troops, only to be betrayed by a lady employed in the castle who allowed the roundheads into the stronghold and led to its downfall and ultimate demolition. Centuries later, locals still claim to see the headless “lady in white” wandering the castle grounds.

In the day, it’s a quaint place. In the night, you want to lock your windows and put the covers over your head. Of course, we didn’t do that.

We started with a few drinks in the Greyhound Inn, which bills itself as the most photographed pub in England (given that it’s in the foreground of almost every photo of the castle). One night, following our pints of bitters and ploughman’s plate, we figured we’d take a misty, romantic walk around the lower parts of the castle — one of those obviously bad decisions that people make in horror movies.

We were swallowed by inky blackness the moment we descended the stone stairs to the sunken moat around the castle — the weak street lamps of the High Street blotted out by a thick canopy of trees. What once had been a robust flowing water course had dwindled to a little algal-smelling stream whose murmurings in the darkness sounded irritated. The temperature on the footpath along the stream — itself invisible in the dark — was noticeably cooler with an ancient smell of rotten, loamy soil.

Fewer than a dozen blind steps down the path and every instinct in me said this was no place to be at night. Every time I’ve ever felt that “watched” it’s turned out that I was being watched. I expected any moment to feel a wet hand wrap around my ankle and pull me down among the slippery rocks in the nearby water.

“This is pretty spooky,” I said with entirely too much fake playfulness. “OooOohhh.”

I did not convince myself, nor do I think I convinced my wife, who I remember was hot-stepping right on my heels.

As we continued on our way, I became increasingly sure — outstripping any attempt to rationalize my fear — that we were being followed, even surrounded, by a waiting malevolence that couldn’t quite decide what to do with us. It felt threatening but quiet, hiding itself in the splashes of the little stream, which sounded exactly as it would if someone were wading and walking against its current a few feet behind us. To this day, I don’t like to think about what I may have seen had I looked back down the pitch-dark path.

We tried to keep up some more banter to cover our terror, breaking the bizarrely quiet closeness with lame jokes and strained laughter, but eventually found ourselves nearly jogging to get out of that ancient ditch. When we did, we came to a narrow road with signs posted to beware of thieves. Absolutely certain that we would not be returning to the Bankes Arms by the way we came, we decided to brave the bandits and cross a field that we’d seen earlier in the day.

It wasn’t the same field, and we bushwhacked blind through copses of gnarled oaks until stumbling into the town graveyard — which was filled with grazing sheep that we first took to be, well, not sheep.

We scrambled over low stone walls until finally bursting through a hedge on a street a few blocks from the Bankes Arms. We decided we deserved a nightcap.

Back at the Greyhound, we had a whiskey or two and laughed about our frightfulness. Buoyed by the drinks, we crossed the deserted, mist-slick square on the way back to our room. Looming over us was the old St. Edward church — looking like a black obelisk rising in the sky. We noticed the gate was ajar, and so thought we’d poke our heads in for a quick look around.

The moment I stepped into the churchyard, the bells sounded in the belfry — and not the way they should have. This was no rhythmic chiming of the hour. I can only describe it as a cacophony of clanging and wrenching; ear-splitting and discordant. My wife and I jumped back and sprinted to our room, the angry pealing following us all the way to bed. I looked out the window, through the mist, and instantly heard the bells fall silent.

By my watch it was neither the top nor the bottom of the hour; nor was it a quarter hour or any other time that would reasonably require the chiming of any bell. Doing what we should have done to begin with, we jumped into bed, closed the drapes, pulled up the covers and turned on the television like some kind of talisman against evil spirits.

We checked out the next morning following a nervous meal in the breakfast room, taking a moment to ask about the bells. The old woman at the front desk looked at us through narrow, suspicious eyes and said she had no idea what we were talking about — that the bells at Corfe were pulled by hand and all the ringers elderly people who would have been warm in bed, particularly on that chilly, misty night. What’s more, she hadn’t heard a thing.