Twenty-five years ago, a small group of dedicated disc huckers began scheming to find a way to bring disc golf to Sandpoint. After several stops and starts, as well as a former location, the Baldfoot Disc Golf Course is the result of all that hard work. The new course is poised to open this weekend, taking its place among Sandpoint’s growing list of outdoor activities.

There will be a ribbon cutting to celebrate the grand opening at the Baldfoot Disc Golf Course on Saturday, Oct. 24 at 12 p.m. The park is located at 10076 Baldy Road, just past the railroad tracks when heading west. 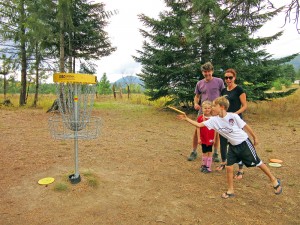 Rick Leader (back) stands with Shannon Williamson and her children Emmerson and Finn Epphard. Photo courtesy of Eureka Institute.

Through the collaborative work between the City of Sandpoint, the Eureka Institute, the Sandpoint Disc Golf Association and a multitude of local businesses and individuals, the new course will cater to everyone from families to traveling professional players.

“It’s a shooter’s course,” said Rick Leader of the Sandpoint Disc Golf Association. “You don’t have to throw hard to score well, you just have to know how to fly that disc.”

Originally located on the University of Idaho Extension property on Boyer Avenue, the location moved to Baldy after organizers learned the University would displace a portion of the course with a driving range.

In August, 2013, the Eureka Institute entered into a license agreement with the city of Sandpoint to create a new and improved 18-hole course at the current location on Baldy Road. After countless hours of volunteer work, the Baldfoot Disc Golf Course became a reality in spring, 2014.

“It’s been an honor to work with the Sandpoint Disc Golf Association,” said Steve Holt, the executive director of the Eureka Institute. “Their efforts have been invaluable in making Baldfoot Disc Golf Course a reality. We wouldn’t be where we are today without them.”

The public can play the course anytime for a nominal $1 fee, which helps pay for course maintenance, new baskets, concrete tee boxes and signage.

“It’s pretty cool,” said Leader. “It talks a lot about our community to have this course here. People are willing to put their dollar in and you see the results of it.”

Along with regular maintenance, the course helps generate money by offering hole sponsorships for area businesses. The money will go toward some future projects like the installation of a permanent vault toilet, a shelter for inclement weather and more picnic tables and benches.

In the months leading up to the grand opening this weekend, Leader said the course has seen over 1,500 users per month, quite a few coming from out of town.

“A lot of people are quite fond of the course regionally,” said Leader. “We’re getting a lot of out of town play, which is what we love.”

Along with open play, the Sandpoint Disc Golf Association usually schedules three or four tournaments per year, which have amateur as well as professional divisions.

“If you feel like you’re good enough to go for the money and win, you can go for the professional division,” said Leader. “At this course, if you can play scratch, you’ll be in the running. To win, it’ll take a six or seven under.”

To score under par at the course is indeed a difficult feat, as most of the holes are tree-lined and filled with obstacles that make the errant toss trouble. Luckily, most of the hazards are searchable, so the loss of discs is minimal.

For families and children, the Baldfoot Course will also offer another option that will officially open at the grand opening on Saturday; a children’s course. The holes will be shorter in distance and more open than the regular course.

“I’m excited about the kids’ course,” said Leader. “I want to see a ton of families out there at the opening to play the course.”

The Sandpoint Disc Golf Association will have plenty of extra discs on hand Saturday for kids to learn to throw. They will even give an instructional clinic to teach the basics and the rules of the game for novices.

Players looking for discs to purchase are encouraged to buy them at Greasy Fingers, Outdoor Experience or Big 5 Sporting Goods in Sandpoint. Those interested in sponsorships, or volunteer opportunities can call Steve Holt at the Eureka Institute at 265-4000.

“Overall, development of property in such a way to create more open space improves our physical and psychological health,” said Holt. “It fortifies our communities and makes our cities and neighborhoods more appealing places to live and work. We are absolutely thrilled to offer this remarkable community amenity and can’t wait to see everyone at the grand opening.”