If time is a necessary ingredient in cooking up a legend, then the Nitty Gritty Dirt Band has servings to spare. The country-folk-rock outfit marks its 50-year anniversary this year and is bringing the celebration to the Festival at Sandpoint stage Friday, Aug. 12.

Longtime band member John McEuen took the time to chat with us about the band’s legacy and his experiences on stage. He also gave us the inside story about making his forthcoming solo album, “Made in Brooklyn,” where he’s joined by guest artists like Steve Martin, John Cowan, David Bromberg, John Carter Cash and many more. 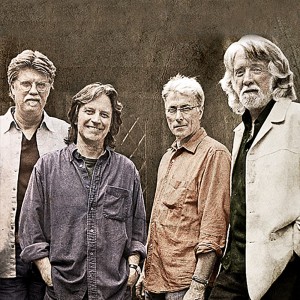 Sandpoint Reader: So the Nitty Gritty Dirt Band is back in Sandpoint for another performance at the Festival at Sandpoint. How does it feel to be returning?

John McEuen: Come on, the Dirt Band doesn’t want to go to Sandpoint and play a great festival with a few thousand people that love us! No, we don’t want to do that!

SR: Yeah, why on earth would you want to do that? You know, the Dirt Band is local favorite not just here, but really all over the area. What are your expectations following up from your last show at the Festival, which I think was in 2010?

JM: Yeah, that sounds about right. I’m excited to play anywhere with this band because it’s the best version of the Dirt Band that’s been out there. … We’ve put in some old songs that are so old they’re new. Can you imagine being in a group and having songs you did 40 or 50 years ago? Jim Photoglo, the man who wrote “Fishin’ in the Dark,” he’s having a great time seeing people respond to his song. He plays bass, so we’re not just taking him out to have dinner back-stage. And Bobbie Carpenter who joined the band in 1978 … when he first got into the group he had a song that went number one.

SR: With all the musicians that have gone through the Dirt Band line-up over the years, is it tough to cohere together, or has that not been a problem?

JM: It shouldn’t be said that the band line-up has changed frequently. … [Jimmie Fadden] and [Jeff Hanna] have been there all 50 years. I’ve been there most of the 50 years. And Bobbie Carpenter has been in the Dirt Band longer than most groups have been together—35 or 38 years. I left for a while and came back. So in that course there’s been other players we’d bring in … but it hasn’t been a group that’s changed personnel. It’s grown and shrank again … it’s a living, breathing thing.

SR: I think that impression speaks to the longevity of the band. Can you tell me what keeps you guys doing what you’re doing?

JM: What keeps me doing what I’m doing is this is what I do. I try to make things in the entertainment business. I have a radio show on XM Satellite Radio in its eighth year. I produce other projects for people, like Steve Martin’s album “The Crow” that won a Grammy a few years ago. I make my own albums—still playing with the Dirt Band, but when the group isn’t working I do my own solo albums. So what keeps me going is that there’s people out there that like it, so how could you not do it? How could you be a plumber sitting in your house saying, “I’m only going to be a plumber in my house.” … I’d say nothing makes me do it. I get to do it.

SR: Let’s talk about this solo record you have coming out, “Made in Brooklyn,” which is coming out on Sept. 30. When did you have the idea for that, and what was the inspiration behind it?

JM: I had the idea about three years ago, but it takes a while to get things together and get the timing where everyone I wanted was available. Eventually they were and the record company was ready, so we said OK. The inspiration was that in the work I do, I’ve met and played with a lot of people over the years. And I have a lot of road friends that are musicians. But they don’t know each other, so I brought a bunch of them together in one place.

… And boy, we’re they happy to play together. Everybody just fit together. It was great. We knocked out the album, and Steve Martin was sitting there playing banjo on the song I’d asked him to play on. He said, “What are you calling the album?” I said, “I don’t know.” He said, “Why don’t you call it ‘Made in Brooklyn,’—that’s where we are.” And I couldn’t get it out of my head.

We only recorded for two 12-hour days, but it seemed like three-hour days. It’s really wonderful to start at 10 in the morning, wind up at 9:30 at night and have players going, “What else can we do?” I said, “Well, how about going home?” “Oh. Well, OK.”

SR: I imagine it’s no easy thing to get musicians in such high demand together at once.

JM: The most difficult part was the schedule, to get three days where everyone was available. These are people who are in 10 different worlds. We had some time set for February, but it was just going to be too cold to record, because we were recording in a big, old church in Brooklyn. Another chance came in April, and I’m glad we waited.

SR: How does the music compare to the Dirt Band? Is it much different in style or tone?

JM: The overall description might just be Americana or country folk or something. There’s a bluegrass song followed by a 1940s-sounding song followed by an instrumental using traditional instruments in a way that’s different followed by a song that’s funny. It’s a collection of material—half of it is original and half is written by friends, which is a very common thing for me.

SR: Getting back to the Dirt Band, is there any message you want to send to fans before your Festival show?

JM: I think the most important thing is getting people out to the Dirt Band show, which in Sandpoint, I don’t think we’ll have much trouble. But if someone’s on the fence thinking, “Well, I’ve seen them before,” let me tell you, they haven’t seen us like this.

I think everyone’s appreciating the fact that 50 years have been sunk into this. This is going to be a longer show, and yes, I think it is better than ever. Since it’s a weekend show, there’s going to be a lot of energy. This isn’t like we’ve been doing five shows beforehand. And it’s interesting: Jeff has been playing better guitar than I’ve ever heard him play, Jimmie’s harp is as good as ever and the vocals sound better than they ever have.

SR: I wanted to end on one funny story I just heard, even though I guess it’s a pretty well-known one. I understand that in the early ‘90s, President George H. W. Bush mentioned the Dirt Band and kind of butchered the name, calling you guys the Nitty Ditty Nitty Gritty Great Bird. What did you think about that at the time?

JM: He said that because on his desk, he had the phrase, “If you want to see a rainbow, you have to stand a little rain,” which is a song that Bobbie Carpenter sang that went number one when he first joined the group. How do I feel about it? That’s the president of the country quoting your band! And mangling the name, that’s understandable. Most people couldn’t say the name after a big night anyway.

SR: Thanks so much for taking the time to talk. Before I let you go, are there any last comments you want to make?

JM: I’d just say that audience reaction is the reason the group gets to come back to places like Sandpoint. I’m hoping to see if people will want to take a listen to the “Made in Brooklyn” album and see if they like that.

Here’s the thing I’d like to see happen. People ask us, “Where have you been playing?” and we tell them, “Sandpoint, Idaho.” If they’ve never heard of it or been there, then the next thing is you tell them what it’s like, which is always a fun thing to tell them about. “It’s like Aspen was in 1972. It’s like an old Colorado ski town.”

The other thing I’d like to have happen is when people leave the concert, hopefully the next day when people ask them what the show was like, they’ll just say, “You should have been there. I can’t describe it.”

Catch the Nitty Gritty Dirt Band with opener Luke Bell Friday, Aug. 12. Tickets are $44.95 and are available online at www.festivalatsandpoint.com. Gates will open at 6:00 p.m. and the music starts at 7:30 p.m. And look out for John McEuen’s solo album “Made in Brooklyn” when it releases Sept. 30.