Get your peepers checked

New technology makes it easier to scan your retinas for issues

When’s the last time you had your eyes examined? If you’re like me, it’s been years. I think the last time I had an eye test it was one of those simple, “Hold one hand over your eye and read the letters off the chart,” to check my vision. 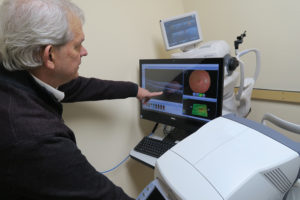 Dr. Paul Koch points out the different layers his new machine on the author’s retinal scan.

Things have changed a bit since then – mainly, the technology has improved remarkably.

For optometrist Dr. Paul Koch, who owns the Optometry portion of the Vision Center inside the Ponderay Walmart, one new piece of equipment he recently added to his inventory helps to map the retina and diagnose retinal issues much quicker.

The device is called a Topcon Maestro 3D OCT-1 retinal camera, with OCT standing for Optical Coherence Tomography. To show me how it worked, Koch took a scan of my own retinas.

“It’s a tool,” said Koch. “I’ve spent 34 years looking at a flat image of the retina, but now, with this machine, it’s like flipping that flat image on its side so you can see the layers underneath. I can look at it from many angles.”

For Koch, the machine helps him get a clearer, multi-angled image of the retina to help watch for conditions such as macular degeneration, glaucoma, diabetic macular edema and others.

“It takes a picture of the retina and has a scroll so you can scroll through the retina if you see something,” said Koch. “It looks like an MRI, basically, looking at what’s underneath all those layers. I had a patient who didn’t see perfectly, and ended up having a case of solar retinopathy due to looking at the eclipse without eclipse viewing glasses. Boom, the scan picked up the mild damage to the retina.”

My eye scan only took a moment. I placed my head before the device and looked into a screen where there was a green X and a red line. While looking at the green X, the red laser line charted across the screen quickly, then there was a flash of light and we were finished. A moment later, there was my retina on his computer screen.

A traditional top down image of a retina (left) compared to the new image (right) which shows layers and depth. Photo courtesy of Topcon.

“Looks like you have a slight vitreous detachment,” he pointed to the screen where there was a thin gap between the retinal wall and the vitreous, or gel, of the eyeball. Koch explained that it is a normal condition as people age, and that “floaters,” or those little annoying things you sometimes see in your vision, are the most common byproduct this condition presents. He said if I started to see flashes of light in my vision, it might be an indication of traction from the vitreous tugging on the retina, or even a retinal tear. Otherwise, he wouldn’t be too concerned about the floaters.

On the screen, Koch pointed out the macula on my retina, which appears as a dark spot. The macula is the small “dip” on your retina where most everything you see is funneled into, and contains mostly cones, which deal with fine-tuned vision. Rods, on the other hand, deal mostly with night and peripheral vision.

“I try to make a wellness scan on the new machine a part of most of my eye exams,” said Koch. “It helps for me to be able to watch a certain area over time, and if necessary, to send the patient onto a retinal specialist.”

“Fortunately most people who complain of blurry or fuzzy vision simply need a change in their glasses or contact prescription – also cataracts and other conditions cause blur, but macular degeneration is becoming a lot more prevalent due to a large aging population,” said Koch. “Imagine if you put a hand right in front of your face. That’s what it’s like – you can see peripherally okay, but everything in the center is blurry.”

Koch said everyone should get regular eye exams, but especially people 50 and older when age-related conditions start presenting themselves. To schedule your own eye exam, make an appointment with your optometrist. If you’d like to check out Dr. Koch’s new machine, give him a call at the Vision Center – (208) 255-5513.